KRAUST to crash the business end of the Top500 list

The new 25-cabinet HPE Cray EX4000 system will be equipped with more than 2,800 Nvidia Grace Hopper GPUs and is expected to deliver 100 petaflops of performance. 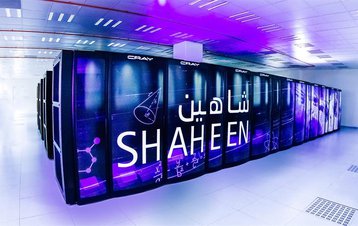 It will include HPE Slingshot networking cables, AMD’s next generations Epyc CPUs, known as Genoa, and a Cray ClusterStor E1000 storage system

KAUST & HPE said Shaheen III is set to be 20 times faster than KAUST’s existing system, and will reportedly be the most powerful supercomputer in the Middle East. Shaheen III will be fully operational in 2023.

“At HPE, our purpose is to advance the way people live and work, and we are honored to help fuel Saudi Arabia’s Vision 2030 for a new era of innovation by empowering KAUST with a state-of-the-art supercomputer,” said Antonio Neri, president and CEO of Hewlett Packard Enterprise. “Shaheen III will significantly accelerate research at KAUST by applying world-leading supercomputing and AI-at-scale capabilities to increase accuracy in analyses and solve complex scientific questions.”

“The new HPE Cray EX system will allow us to conduct research on a larger scale, resulting in significant scientific, economic and social advances,” said Dr. Tony F. Chan, President of KAUST. “In line with Vision 2030, we strive to meet the ever-increasing demands of our active and solutions-driven faculty, and also those of external partners, for faster and more efficient computing resources. KAUST supercomputing resources are used by more than half of our faculty, students, postdoctoral students and researchers, and researchers from more than 20 external organizations in the Kingdom.”

KAUST’s first supercomputer, Shaheen I, launched in 2009, followed by Shaheen II in 2015, a Cray XC40-based supercomputer offering 5.54 petaflops of performance. IN 2019 the university announced plans to deploy a Cray CS-Storm 500NX supercomputer.

If launched today, 100 petaflops of performance would place Shaheen III fourth on the Top500 list of most powerful supercomputers; ahead of the US DoE’s Sierra system and behind its Summit machine, both launched in 2018.