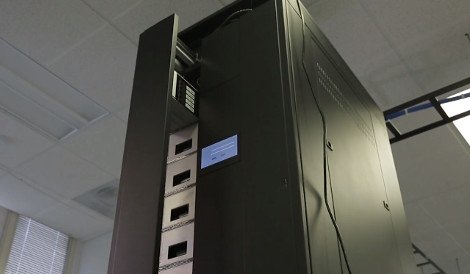 Facebook's infrastructure team has shown once again that it will stop at nothing in its never-ending quest to shave every dollar it can from its operational costs. The latest invention is a cabinet stuffed with Blu-ray disks that uses a robotic “picker” to find data in the archive.

Jay Parikh, the social network's VP of infrastructure engineering, mentioned the prototype “cold storage” system during a keynote at the Open Compute Summit in San Jose, California, earlier this week. It was an event of the Open Compute Foundation, an open source hardware design community started and led by Facebook.

The team chose Blu-ray Disc as a storage medium because of its data density and longevity. The 10,000 disks in the current prototype offer one petabyte of storage in aggregate and are certified to keep data in tact for 50 years.

Parikh expects the system to reduce cost by 50% from the current approach to cold storage (low-performance storage systems for infrequently accessed files, such as old Facebook photos), and use 80% less energy.

Gio Coglitore, director of hardware design at Facebook, said the rack is built to Open Compute Project standards, which means it has OCP-specified dimensions and power configuration. What this also probably means is that the company will open source the design through Open Compute, like it has done with much of its other hardware.

“You'll be able to wheel this into any OCP-compliant data center and bolt it right up,” Coglitore said in a Facebook-produced video about the prototype.

The rack has 24 magazines, each magazine holding 36 cartridges. Each cartridge contains 12 Blu-ray disks.

The robotic picker goes to a specified magazine, locates a cartridge, unlocks it and removes it from the drawer. It will then select a specified disk.

The robot consumes a fraction of the power consumed by a magnetic spindle in a regular hard drive. In cold state, the cabinet's power consumption is close to 'zero'. Once it is retrieving data, it requires less than 100 watts, Coglitore said.

Another benefit is easy replacement of the mechanical parts. If there is an issue with the drive, only the drive can be replaced without the need to replace the disks.

“It's quite elegant and efficient,” Coglitore said.

If Blu-ray Disc becomes a popular format for archiving, it will open up a new market for vendors of the medium.

One such vendor is Panasonic, which is looking to expand its presence in the data center market. Jeff Hnatek, a senior business development manager for the electronics giant, told us in December that Blu-ray Disc for cold storage applications was one of the potential avenues the company was planning to use to increase sales into the data center space.