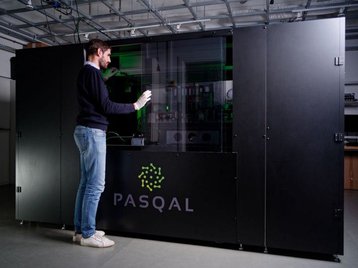 Pasqal will use the funding to further develop its neutral atoms quantum computing platform and build a 1,000-qubit quantum computer, as well as increase headcount and open more office locations.

“We are on a clear path to deliver a quantum computer capable of unlocking commercial advantage for our customers, and this latest investment round will help us reach this goal by 2024,” said Georges-Olivier Reymond, CEO and founder of Pasqal. “This funding round validates that neutral atom technology is a premier platform for delivering real-world quantum applications, and we are proud to see its potential recognized by top investors.”

Christophe Jurczak, managing partner at Quantonation, added: “We are very proud of this new milestone in Pasqal’s development that will make the company a world leader. Quantonation has supported the company since its spin-off from Institut d’Optique.”

In other quantum computing news:

“The government's continued investment in quantum technologies has been invaluable to our success. We are proud to be a Canadian company and, with this investment, are excited to enter the next phase in our mission to build quantum computers that are useful and available to people everywhere,” said Christian Weedbrook, founder and CEO of Xanadu.

The round was led by Quantonation, with the participation of Luxembourg-based Runa Capital, and support from the Paris Region, the French National Quantum Initiative, the French Banque Publique d’Investissement (BPI), and the European Commission.

- IonQ has announced plans to develop a manufacturing facility in Seattle, Washington. To be located in Bothell, the 65,000-square-foot facility will house IonQ’s quantum data center and be the primary production engineering location for IonQ in North America.

“Advanced technologies like quantum computing are key to solving some of the world’s most pressing challenges such as climate change, energy, and transportation,” said Peter Chapman, CEO and president of IonQ. “As we planned our expansion, the Seattle area was the best option for our new facility. We’re excited to be among the other innovative companies who call Seattle home, many of which are IonQ partners and customers.”