New system to be used to study hypersonics, archaeology, biology, and contribute to the National Science Foundation’s XSEDE project network

The Dell system consists of 1,000 nodes with two 64-core third-generation AMD Epyc Milan processors each, and will have a peak performance of 5.3 petaflops. 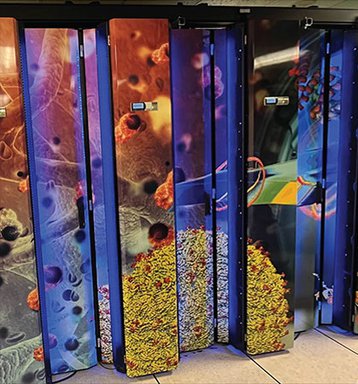 Anvil's nodes are interconnected with 100 Gbps Mellanox HDR InfiniBand, and includes 32 large memory nodes, each with 1 TB of RAM, and 16 nodes each with four NVIDIA A100 Tensor Core GPUs providing 1.5 PF of single-precision performance to support machine learning and artificial intelligence applications. Research on Anvil will be able to leverage a diverse set of storage technologies, anchored by a 10-plus PB parallel filesystem, boosted with over 3 PB of flash disk.

“We see Anvil as a system forging the future of computing," said Carol Song, principal investigator and project director for Anvil, and a senior research scientist for Purdue Research Computing. "We expect tens of thousands of researchers around the nation to access it and enable their transformative research. We call it science as a service."

Installed at Purdue, the system is being tested by more than 30 research teams and is expected to enter full production later this year and will serve researchers for five years.

Purdue researchers will use Anvil for projects such as hypersonics research into predicting and controlling the extreme aerothermal loads that occur in flight at high Mach numbers; Deep learning research; Archaeological reconstruction and creating detailed 3D models of urban spaces; and bone biomechanics to study enhanced bone hydration as a novel pathway to reduce bone fragility.

Purdue said Anvil is funded by a $22.5 million grant from the National Science Foundation. As well as Purdue’s own researchers, the supercomputer will support the NSF's Extreme Science and Engineering Discovery Environment (XSEDE) project; a single virtual system that scientists can use to share computing resources & data.

“We designed Anvil to fit a broad cross-section of research work,” said Preston Smith, executive director of research computing and a co-PI on the project. "More researchers than ever before are relying on high-performance computing, and Anvil will be optimized for both the traditional parallel computing that drives research in areas like fluid dynamics and bioinformatics, and also for data science, artificial intelligence, and machine learning applications."