The system was meant to be the most powerful system in Europe, in the top five globally, and the largest system procured through the EuroHPC initiative. Its current official status is unknown, but its would-be hosts are still expecting its delivery by the end of the year.

Due to be hosted at the Barcelona Supercomputing Center (BSC), MareNostrum 5 would have an expected peak performance of at least 200 petaflops. Its five-year cost will be or would have been €223 million ($263.8 million). 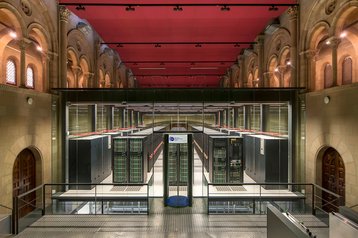 According to the document published on the EuroHPC site, voting results at a recent meeting “did not achieve the needed majority to reach an agreement to adopt the selected tender.”

“The lack of decision leads to the cancelation of the public procurement for the acquisition, delivery, installation, and maintenance of Supercomputer MareNostrum 5.”

Politico reports that Anders Dam Jensen, the head of the EuroHPC Joint Undertaking, informed the companies that the tender procedure had been canceled because its specifications were no longer sufficient.

However, it also reports that politics behind the scenes was also to blame, with parties divided over whether to focus on sovereignty and rely on local ‘made in Europe’ supply chains or buy the best available technology to better support research.

The publication claims Spain did not want to accept the recommendation of the advisory boards to select Atos. A joint IBM-Lenovo bid offered a more powerful device at a better price, but the French technology supplier has a more Euro-centric supply chain.

“We expect the best supercomputer possible for the researchers,” a spokesperson for the Spanish government said.

In a preliminary assessment by the Joint Undertaking's advisory boards, IBM reportedly came out on top for the quality and price of its bid but did not reach the required threshold for ‘EU added value’ around improving EU supply chains.

Last year Lenovo filed a challenge against a decision to award the Leonardo supercomputer contract to Atos, arguing against the EU added value requirements. The case is ongoing.

Maria Demertzis, from the think tank Bruegel, told Politico the EU should be careful not to hamper research and innovation with its interventions.

"I find it strange to believe that if we were to go down the protectionist route, we would start with research. That is one area that benefits the most from international cooperation," she said.

The current status of MareNostrum 5 is unknown, but the BSC at least seems to think the system will be deployed. Speaking at ISC21 last week, BSC operations director Sergio Girona said the BSC is well on its way to completing the facility meant to host the new supercomputer.

“We have not finished the tender process,” Girona said. “As you know, the tender process was canceled due to changes on the specifications of the system. But we’re expecting that the relaunch of the procurement is in short [order],” pending action by the JU’s governing board.

“The timeline is not different,” he added. “The expectation is still that the system will be ready for installation at the end of this year, of some partitions.”

Girona said the facility had installed five transformers totaling 20MW, and cooling towers with total capacity of 17MW of cooling that will serve not only MareNostrum 5, but also 'new components to come' in the future.

“We have almost finished the computer room for installing the system of MareNostrum 5,” he said.