Vision for a massive hyperscale campus upwards of 150 MW.

Located in Cibitung at West Java, Indonesia, JK3 is a seven-story facility with four data hall floors with the remaining floors for M&E equipment. Constructed in collaboration with Equinix, JK3 has a total IT load of 12MW and will begin operations in early 2020. 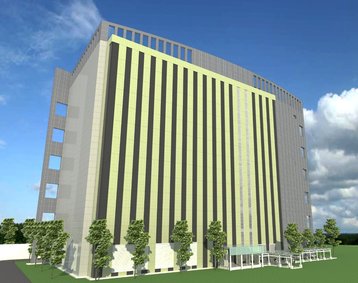 “We have acquired land with a total of 85,000 sq m which will be [used to build a campus of data centers] totaling more than 150MW. Our long-term vision is to become the largest [data center campus] in Southeast Asia,” Oscar Stephanus, the sales and marketing Manager of DCI Indonesia, told DCD.

DCI cited the rapid growth of startup companies in Indonesia – the country has five unicorn companies, or businesses with a valuation of more than US$1 billion, its population, and a growing digital economy, as the reasons why it expects a surge in demand for hyperscale data centers.

“As an Indonesian company, DCI is ready to become the pioneer of largest hyperscale data center facility in Indonesia. With the construction of JK3, we want to reinforce our commitment and seriousness in supporting the development of Indonesia's digital economy towards the coming of the Industrial Revolution 4.0,” DCI CEO Toto Sugiri said.

In Singapore, at least half a dozen hyperscale facilities of between 30MW and 60MW are scheduled for completion within the next couple of years. However, concerns over the carbon footprint of data centers are understood to have led to a moratorium on new data centers that could last until 2021.