Hermosa Ranch data center would ‘put too much strain’ on the water system, warn city officials

A proposal to change a city’s general plan for a plot of land from residential to a business park and data center has received pushback from planning commissioners in Avondale, Arizona. 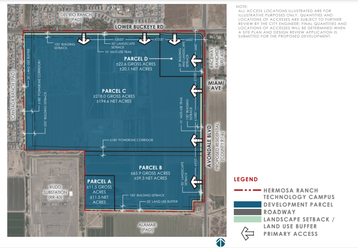 The companies are proposing changing the land allowance on a 309-acre site from residential to allow a business park and include a data center.

However, at a November 17 meeting, the city’s commissioners recommended city council vote no on amending the city’s general plan, citing concerns with water use and impacts to future development.

There is currently a dairy farm on the property site in conjunction with agricultural uses, and surrounding residential properties. The site has largely been used as ranch or farmland throughout its history.

The current General Plan land use allows for residential and local commercial uses. The developers were requesting the land use is changed to Business Park (BP), which would allow for light manufacturing, corporate commercial, hotel, multistory office, research and development industries, solar and renewable energy manufacturers.

Avondale commissioners said the fact the land is surrounded by residential land, currently adequate business and employment development opportunity, and a lack of available water, the plan amendment should be denied.

“The City’s water portfolio can handle the growth of housing, commercial, and light industrial; however, the addition of a data center would put too much demand and strain on the system to produce and treat capacity,” warns council documents. “Water usage for a data center can use amounts that would serve tens of thousands of single-family residential homes. Developing a data center during a time of uncertain water supplies can negatively impact overall residential and commercial development plans for Avondale.”

BizJournal reports that Carolyn Oberholtzer, zoning attorney with Bergin, Frakes, Smalley + Oberholtzer PLLC and representing the landowners, said an application for a master-planned community with a commercial corner was initially planned, but during the process an energy storage developer approached them about a battery storage facility. The city recently approved San Francisco-based Plus Power's facility for about 12 acres of the site.

“It was during that process and their work with the energy developers that they came to understand that this property has some very unique attributes ... where certain tech users are concerned, and that’s being adjacent to the Rudd Substation and the power infrastructure that connects to it,” she added.

The landowners submitted a new application for rezoning and an amendment to the city’s general plan that would allow for a technology campus if approved. One of the main developments on the site is hoped to be a data center, said Oberholtzer.

The backgrounds of TGV Investments Voting Trust and Rexco DC LLC are unclear; the former may be related to True Global Ventures, an investment firm that has invested in a number of blockchain-related companies.