The cloud war of words continues

As regular DCD readers know, not all data centers are born equal, a fact that - in the competitive world of cloud computing - can lead to disputes over which company has ‘the best’ service.

In this vein, Oracle co-CEO Mark Hurd has suggested that his company can rely on fewer data centers than its cloud counterparts as it can squeeze more bang for its buck out of each facility. 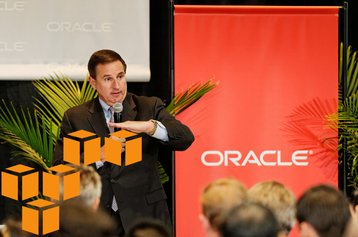 When asked by Fortune about the disparity between Oracle’s expenditure on the cloud compared to AWS, Google Cloud Platform, or Microsoft Azure, Hurd said: “We try not to get into this capital expenditure discussion. It’s an interesting thesis that whoever has the most capex wins.

He later added: “Our core advantage is what we’ve said all along, which is that it’s about the intellectual property and the software, not about who’s got the most real estate.”

In reaction to Hurd’s comments, AWS VP and distinguished engineer James Hamilton said in a blog post: “Of course, I don’t believe that Oracle has, or will ever get, servers 2x faster than the big three cloud providers.

“I also would argue that ‘speeding up the database’ isn’t something Oracle is uniquely positioned to offer. All major cloud providers have deep database investments but, ignoring that, extraordinary database performance won’t change most of the factors that force successful cloud providers to offer a large multi-national data center footprint to serve the world.”

Hamilton went on to explain the need to have multiple data centers in a region for redundancy reasons - “One facility will have some very serious and difficult-to-avoid full-facility fault modes like flood and, to a lesser extent, fire. It’s absolutely necessary to have two independent facilities per region and it’s actually much more efficient and easy to manage with three.”

He also described why AWS decides not to build huge data centers. “AWS can easily build 100-megawatt facilities,” he claimed, “but the cost savings from scaling a single facility without bound are logarithmic, whereas the negative impact of blast radius [the damage caused if it goes down] is linear.”

With this in mind, Hamilton said: “AWS currently elects to build right around 32MW.”

If you Hurd me now

This is, of course, not the first time that AWS and Oracle have engaged in a war of words.

In February, Hurd called AWS old and proprietary, and has previously dismissed AWS’ database products Aurora and Redshift as having a small market share. Last year, executive chairman and CTO Larry Ellison declared that “Amazon’s lead is over,” adding “Amazon is going to have serious competition going forward.”

AWS CEO Andrew Jassy has responded to such taunts by standing in front of an image of Larry Ellison and saying that the cloud gives the ability to see through the “hand waving and bombast” of other companies.

He added, in reference to Oracle and IBM: “I think that they fought as long and hard as they could. They pooh-poohed [the cloud] and they said, first no one will use it, then maybe only startups will use it, and they won’t use it for anything real, then enterprises will never use it, then enterprises will never use it for anything mission-critical. Companies and developers voted with their workloads, and so now they’re in this spot of trying to spin something up. It’s six, seven years late.”