Hurd gets aggressive, with arguments some might find surprising

The war of words between Oracle and Amazon continues, with Oracle taking Amazon to task for using proprietary databases and running old technology.

At the Goldman Sachs Technology and Internet Conference, Oracle co-CEO Mark Hurd claimed that his company’s cloud offering was better than that of market leader Amazon Web Services. 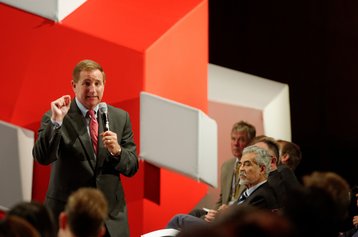 That is one perspective

“Amazon’s infrastructure, to be very blunt, is old,” Hurd said. “Ours is newer and fresher.”

He added that Oracle “sold more cloud recurring revenue than anyone in the industry, bar none.”

When it comes to the other major cloud players, it can be difficult to ascertain the actual revenue of each company’s cloud business.

Microsoft’s ‘intelligent cloud’ unit grew 8 percent to $6.9 billion, with the Azure aspect of it increasing 93 percent, but without specific figures given.

IBM put its fourth quarter run rate (an extrapolation of financial results into future periods) for its technology services and cloud platform business at $5.8 billion, but did not go into detail about how much of that was just its cloud business.

Google, meanwhile, was even more unclear, bundling its cloud revenue in with its Play and Hardware divisions. That part of the company hit $3.4 billion in revenue, up 62 percent year-on-year.

Hurd also criticized AWS’ database products Aurora and Redshift, and said that only a “very small” number of companies would want to move from an on-premise database to AWS because of its proprietary nature.

“Those databases are the most proprietary in the world,” he said. “I’m totally locked into this space.”

This is not the first time that Oracle, which once called the cloud “gibberish,” has had choice words for Amazon. Last year, executive chairman and CTO Larry Ellison declared that “Amazon’s lead is over.”

He continued: “Amazon is going to have serious competition going forward. And we’re very proud of our second generation of Infrastructure as a Service. We’re going to be focusing on it and aggressively featuring it not only during Oracle OpenWorld but for the remainder of this fiscal year and next fiscal year and the year after that.”

Amazon has not let these comments go unanswered, and late last year AWS CEO Andrew Jassy stood in front of an image of Larry Ellison at the University of Washington and said that cloud gives the ability to see through the “hand waving and bombast” of other companies.

He added, as transcribed by GeekWire, that there were some large technology companies “that just took an ungodly long time to get” to the cloud.

“I think that they fought as long and hard as they could. They pooh-poohed it and they said, first no one will use it, then maybe only startups will use it, and they won’t use it for anything real, then enterprises will never use it, then enterprises will never use it for anything mission-critical. Companies and developers voted with their workloads, and so now they’re in this spot of trying to spin something up. It’s six, seven years late.”

And, in comments that are similar to those made this week by Hurd, Jassy said: “Customers will always be nervous about lock-in, and I think the experience they had particularly with a company like Oracle, where it’s a really hard thing to get out of, and they’re so hostile to their customers, that I think it’s a concern for every enterprise.

“But the reality is it’s so much easier to move from the infrastructure, cloud computing platforms than it is from something like Oracle.”