OpenStack Summit: The next step in private cloud evolution

One of the recurring themes at the OpenStack Summit in Boston was the ongoing evolution of private cloud deployments.

According to Jonathan Bryce, executive director of the OpenStack Foundation, this so-called ‘second generation’ of private cloud based on OpenStack is focused on culture and processes, rather than technology, and is more easily accessible to smaller teams and organizations.

Not your grandfather’s OpenStack 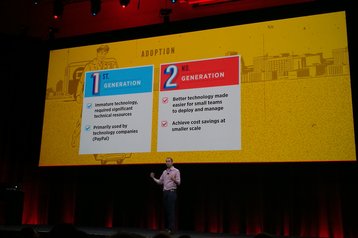 “I think we have actually entered a second generation of private cloud, based on what people are doing and how they are doing it,” Bryce said.

“I think the first generation emerged around the time we launched OpenStack. That had a focus on hyperscale cloud workloads – Rackspace was running one of the largest public clouds at the time, early OpenStack users that were doing private cloud were like Yahoo, eBay and PayPal – they were also running at massive scale.”

According to the latest OpenStack User Survey, today the open cloud platform is being increasingly used by small businesses in an effort to reduce their software costs. It has also been gaining popularity among organizations that cannot use public cloud for regulatory compliance reasons.

“If you look at the technology – the first generation was very focused on compute virtualization. And now we see that everything is virtualized: compute, networking, storage, we are pulling in bare metal, and we are pulling in a lot of other technologies like OpenShift, Cloud Foundry and Kubernetes – and our user survey data backs this up.”

One of the most interesting trends to emerge from the second generation of private cloud technology is the concept of managed private cloud – when an organization’s individual IT environment is delivered as-a-service by a third party. Among other benefits, this approach liberates organizations from having to maintain expensive OpenStack professionals in-house.

Examples of this model include the Managed Open Cloud from Mirantis, officially launched at the Summit. According to its charismatic co-founder and CMO Boris Rensky, the company dropped the term ‘private’ from the product name since it possessed negative connotations in the industry.

“[With managed private cloud] you get the power, long-term cost savings, the customization of the private cloud, without being fully responsible for the operational model around it,” Bryce explained.

To keep up with the developments in private cloud, the OpenStack Foundation has launched a new product category as part of its marketplace: Remotely Managed Private Cloud.

“I think we are going to see more of these over the next few years,” Bryce said.