Volume shipments of the new hardware are expected in June, and will enable system builders to squeeze 10 Petabytes of data into a single 42U rack.

The details were announced at the Open Compute Project Summit in Santa Clara, California.

Seagate has been a member of the OCP since 2013.

To store the Internet 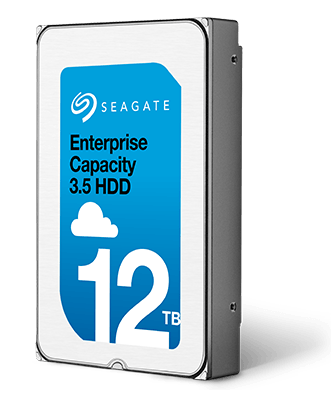 Helium is an inert gas that offers less resistance than air: this simple property enables helium-filled hard drives to have reduced power requirements, weight, disk vibration, mechanical wear and drive temperature. The main challenge with this approach is keeping the gas sealed within the enclosure for the lifetime of the drive.

The upcoming drives take advantage of Helium to increase the number of storage platters within the enclosure to eight, and boost capacity to 12TB. They come in a standard 3.5-inch form-factor, supporting both SATA and SAS interfaces.

According to Seagate, the 12TB version of Enterprise Capacity drive offers 20 percent better random write performance over comparable 8TB air-based HDDs, thanks to its Advanced Write Caching feature with 256MB of memory.

The drive supports Maximum Sustained Transfer Rate of 261MB/s and promises a Mean Time Between Failures (MFTB) of 2.5 million hours, putting to rest any concerns about the reliability of Helium-filled devices.

Seagate’s main competitor Western Digital announced its own 12TB helium-filled drive – the Ultrastar He12 – in December 2016, along with a 14TB version based on Shingled Magnetic Recording (SMR) technology. However the upcoming drives still don’t have an official launch date.