The Department of Energy has begun installing what will become the world's most powerful supercomputer.

Oak Ridge National Laboratory has finished upgrading the data center that will house Frontier, set to be the world's first exascale system (capable of at least 10¹⁸ floating point operations per second). 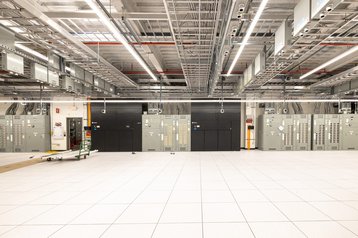 The empty data center that will house Frontier – Department of Energy

Frontier is an HPE Cray system featuring 9,000+ Cray EX nodes, each of which has one AMD Epyc CPU (third gen) and four Radeon Instinct MI200 GPUs.

It is expected to be capable of a theoretical peak performance of more than 1.5 exaflops, consuming 29MW.

"If you use more power, you have to get rid of additional heat, so we are adding the equivalent of 40MW of cooling capacity, about 11,000 tons of refrigeration, for Frontier—much bigger pipes to distribute cool water to the computer,” Justin Whitt, program director for the OLCF, a DOE Office of Science User Facility located at ORNL, said last year.

The system can be expanded to handle around 70MW, should the supercomputer grow in the coming years.

Whitt continued: “Additionally, supercomputer systems have become denser and heavier with each new generation, and Frontier is no exception to that, so we upgraded the raised floor so it could support that weight.”

The site also needed two huge cooling towers with a system volume of 130,000 gallons, with 350-horsepower pumps that can each move up to 10,000 gallons per minute of 90°F (32°C) water through the Frontier system. The four pumps will connect to the data center via 500 linear feet of 24-inch pipe.

The facility was previously home to the Cray XK7 Titan supercomputer, which was sent to be recycled. “I do not believe we have previously recycled a system as large as Titan,” said Craig Webb, a senior manager of logistics at HPE who oversees the company's recycling Take-Back Program.

More than 430,000 pounds of components were ultimately recycled.