NTT MSC, a wholly-owned subsidiary of NTT Communications, this week announced the launch of a substantial expansion to its Cyberjaya 4 data center in Selangor, Malaysia.

Located in Cyberjaya, a technology hub established as part of the country’s Multimedia Super Corridor (MSC) initiative, the extension increases the facility’s total capacity by 40 percent, with 140,000 square feet of space added. 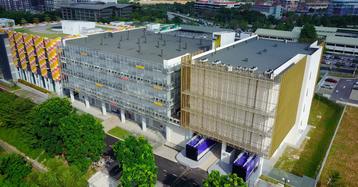 The extension will offer business solutions including cloud deployments and traditional colocation, with an emphasis on business continuity, NTT said.

The data center campus features an integrated operations center and a “Proof of Concept and Innovation Lab,” the latter being equipped with the latest converged infrastructure, aiming to accelerate the commercialization of innovative technologies.

“NTT MSC is one of our earliest MSC Malaysia status companies and has been operating for more than 20 years here. NTT MSC’s expansion and growth is a testimony to Malaysia’s success in becoming the regional Data Center hub in ASEAN,” Datuk Yasmin said, calling the expansion “timely”.