New Edge data center to be built in Trondheim, Norway

Facility will be first from Green Edge Compute, will plug into district heating scheme

Green Edge Compute AS and Statkraft have signed an agreement to build an Edge data center at Sluppen in Trondheim, Norway.

The energy firm has partnered with the new data center company to build a data center ‘in the magnitude of 1-5MW’ and will be built at a location near to the district heating system in order to reuse the facility's excess heat. The new facility will start construction later in 2021.

Register now for our upcoming virtual event on edge infrastructure innovation & deployment: DCD>Building at the Edge 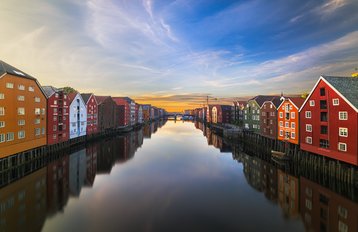 Norway-based Green Edge Compute AS is a new company focused on creating sustainable urban data centers with a focus on smart cities, and the facility in Trondheim will be its first. Founders Svein Harald Olavesen and Patrik Hagelin were both previously at MIRIS, a green real estate development company from which Green Edge was seemingly spun out.

The design for recycling the heat from the data center into the district system was developed through Statkraft’s R&D activity.

“This DC in Trondheim will be our first, and soon we will have such sustainable DCs in all major cities where we can connect to a district heating system,” Green Edge CEO Olavesen said on LinkedIn.

“Sustainability is about the 3 Rs. Reduce, Recycle and Reuse. Thanks to Statkraft for the collaboration on the heat side of our concept!”

Last month a proposal was put forward in the Norwegian Government that would require data centers to plug into local district heating schemes. Minister of Energy Tina Bru wants all companies that build or upgrade large energy-consuming plants to find out whether their waste heat can be used, and interested parties have till 14 April to respond to the consultation.