American ODM Netlist has announced its own take on Storage Class Memory (SCM), combining traditional DRAM and NAND chips on the same board.

The product dubbed HybriDIMM claims to offer persistent storage with large capacities that can perform at close to memory speeds, and would be especially suitable for running in-memory databases like SAP HANA.

Best of all, the server sees HybriDIMM as just another DRAM module, making it fully compatible with current generation x86 servers without the need for BIOS and hardware changes.

The product is being demonstrated at the Flash Memory Summit in San Jose, California, which began on Monday.

In order to keep up with the performance of CPUs – which, as we know, doubles approximately every two years – servers of the future will need fast, persistent memory to occupy the position between NAND and DRAM. 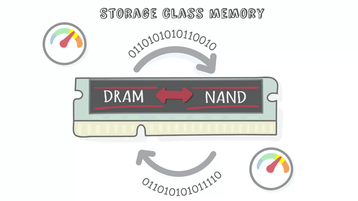 DRAM memory – DDR4 in particular – is really fast, but it’s a massive power hog and can’t store information once the machine is turned off. Flash can store data without using any electricity, but it is too slow for in-memory databases, and while the latest chips last considerably longer than their ancestors, even enterprise-class flash is only good for about 30,000 read/write cycles before the memory cells wear out.

The term Storage Class Memory refers to devices that use use DIMMs as a form-factor to produce devices that offer higher capacities but are less expensive than DRAM.

In 2015 Netlist partnered with Samsung under a joint development agreement for a standards-based SCM. Xilinx and Integrated Device Technology (IDT) have also partnered with Netlist to drive the wider adoption of new memory types.

With HybriDIMM, Netlist has combined NAND flash with DDR4 Load-Reduce DIMM – a type of memory that replaces a register with a memory buffer chip in order to increase supported capacity. The device offers best of both worlds: it is much faster than flash, improving access times by 1000x versus PCIe SSDs, but also costs up to 80 percent less per GB than quality server DRAM.

HybriDIMM also features a storage co-processor that uses PreSight technology to intelligently prefetch the required data from flash to DRAM, so the device always runs at maximum possible speed.

Netlist says this is the first SCM product to operate across current Intel x86 servers without BIOS and hardware changes. For example HPE’s Persistent Memory, announced earlier this year, works in a broadly similar way, but relies on batteries that are part of the company’s ProLiant servers and requires changes in BIOS, which means it can’t be installed in third-party machines.

“Our technology addresses the explosive growth of unstructured data and the increasing need to process that data in memory. By delivering the industry’s first plug and play SCM solution, Netlist is helping to make big data analytics accessible for the broader market,” said Chun Hong, Chairman and CEO of Netlist. “We are excited to be working with global partners to the benefit of end customers.”

The first generation of HybriDIMM devices will offer between 256GB and 512GB of NAND plus between 8GB and 16GB of DRAM on a single DIMM with Linux support.

The second generation will increase capacities to 1TB of NAND and 32GB of DRAM per DIMM, and will also support Windows and Intel’s upcoming Purley CPU microarchitecture.

Netlist plans to provide samples of HybriDIMM to select customers later this year, with volume production expected in 2017.