NEC launches a family of vector systems for HPC

From the desktop to the rack, SX-Aurora Tsubasa hopes to democratize access to vector processors

Japanese IT giant NEC has launched a family of high performance computing products based on its Vector Engine co-processor.

Vector Engine is a PCIe card designed to offer maximum performance when carrying out calculations that contain vectors, unlike traditional (or ‘scalar’) CPUs that are primarily designed operate on integers or floating point numbers. 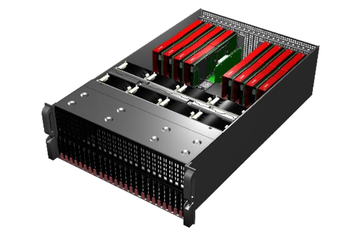 Although most modern CPUs feature some form of vector processing, specialized silicon can offer superior performance when dealing with particularly large and complex datasets.

Tsubasa offers the same hardware architecture and software environment across all products – from desktop towers with a single Vector Engine to several models of rack-based servers, featuring between two and eight VEs, to supercomputer nodes with 64 VEs, capable of delivering 156 TFlops of compute performance and 76.8TByte/s of memory bandwidth.

“The new product addresses the needs of scalar computational capability while still providing the efficiency of a vector architecture. This is accomplished through a tightly integrated complete vector system in the form of a Vector Engine Card,” said Kimihiko Fukuda, executive vice president of NEC Corporation.

“We provide a comprehensive range of products to address widely diversified needs, from a deskside tower for the individual scientist, to a high-end system for large computer centers. Compared to NEC’s previous generation platform, the SX-Aurora TSUBASA is highly power efficient and compact, providing five times the performance per Watt, and ten times the performance per square meter of floor space.”

The entire Tsubasa range will be demonstrated at the Scientific Computing 2017 conference, taking place in Denver in November.