Multinational IT company NEC has deployed a high-performance computer at the University of Ulm, Germany.

The system, JUSTUS 2, is believed to have a peak performance of two petaflops and costs around €4.4m ($4.98m).

The supercomputer was officially deployed on March 6 at a ceremony attended by representatives from the local state of Baden-Württemberg, the university, and NEC.

JUSTUS 2 will aid chemistry and physics risks, something that its predecessor was also doing but, the uni says, the system can do the same tasks for less power.

The local state official, Ulrich Steinbach, said: “JUSTUS 2 enables highly complex computer simulations at the molecular and atomic level, for example from chemistry and quantum science, as well as complex data analysis. And this with significantly higher energy efficiency than its predecessor.

“The new high-performance computer will be available to researchers from all over Baden-Württemberg and is, therefore - particularly with regard to battery research - a very sensible investment in the future of our science and business location.”

JUSTUS 2 consists of 33,696 CPU cores and has the processing power comparable to 15,000 conventional laptops - Five times the capacity than JUSTUS 1. The system is also said to be three times more power-efficient than its its predecessor. 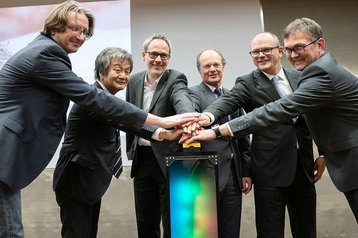 The university's president, Professor Michael Weber, said: “High-performance computing is essential, especially at a science and technology-oriented university like Ulm.

“Therefore, JUSTUS 2 is a significant investment in the future of our strategic development areas and beyond.”

The previous system was also installed by NEC back in 2014. The platform used NEC's own servers which feature Intel hardware.

The "JUSTUS" system was named in honor of the German chemist Justus von Liebig and the computer is meant to help scientists simulate complex chemical processes with computer simulations.

The system will look at the processes behind energy storage and energy transformation, as well as research on molecular mechanics, catalytic processes, and the pharmaceutical effect of medications.