But what does the future hold for climate science?

More than triple the performance of the previous NCAR supercomputer, Yellowstone, it is ranked as the 20th most powerful system in the world according to Top500. 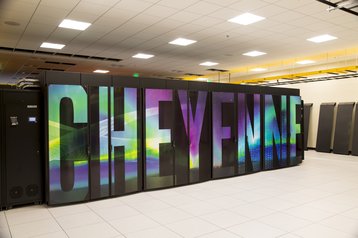 It has more than four thousand dual-socket nodes, 20 percent of which have 128GB of memory, while the rest have 64GB, giving it a memory capacity of 313 terabytes.

The computer has a data storage of 20 petabytes of DataDirect Networks’ SFA14KX systems, with the option to expand it up to 40 petabytes. DDN’s system gives the computer a data transfer rate of 220 gigabytes per second.

Cheyenne has a peak computation rate of more than 3 billion calculations per second for every watt of energy consumed.

The supercomputer is housed in the NCAR-Wyoming Supercomputing Center (NWSC), in Wyoming, and is scheduled to be in operation through 2021.

The new supercomputer will be used to research various Earth system sciences, including climate change, weather, wildfires, seismic activity, solar disturbances, and for predicting how much power wind farms will generate.

“Cheyenne will help us advance the knowledge needed for saving lives, protecting property, and enabling US businesses to better compete in the global marketplace,” Antonio J Busalacchi, president of the University Corporation for Atmospheric Research (UCAR), said.

“This system is turbocharging our science.”

UCAR manages NCAR on behalf of the National Science Foundation (NSF). Currently, the future of the NSF under the new Trump administration is less than clear, however.

Obama appointee France Córdova has been told that she will remain in charge of the NSF, but it is not known if that is a temporary arrangement until a replacement is found. It is believed that Trump’s transition team has had limited contact with officials at the National Science Foundation.

But scientists have expressed concern at what is unfolding at two better-known agencies - the Department of Energy and the Environmental Protection Agency.

The Hill reports that the Trump administration is looking to cut DoE spending aggressively under expected new head Rick Perry, with the cuts modeled closely on proposals created by conservative thinktank the Heritage Foundation. The cuts would impact advanced scientific computing research and the nation’s exascale efforts.

Over at the EPA, Myron Ebell - who led Trump’s transition team for the EPA, has said that he believes the President will gut the agency.

“President Trump said during the campaign that he would like to abolish the EPA or ‘leave a little bit’. It is a goal he has and sometimes it takes a long time to achieve goals. You can’t abolish the EPA by waving a magic wand,” Ebell told The Guardian.

Trump’s nominee to run the agency, Scott Pruitt, has been seen as a controversial pick due to his history of suing the EPA, and the fact that he has received more than $318,000 from fossil fuel companies since 2002 to fund election campaigns.

Kevin Trenberth, a senior scientist at NCAR who was speaking on behalf of himself, not the government body, told Times-Call: “There are major concerns. The concerns stem from a number of statements that Trump himself has made, the appointments that he has nominated at several agencies that are very important to climate and related research, and the threats that have been bandied around in the process. There have also been threats to NASA, to do more space and planet research, instead of Earth-science research.”

It is possible that, even if funding to the supercomputer itself and the NSF as a whole remains unaffected, a decrease in the number of grants available to climate scientists from other agencies will impact the number of researchers able to use Cheyenne.

Speaking in regards to the new supercomputer, NCAR Director James W. Hurrell said: “Providing next-generation supercomputing is vital to better understanding the Earth system that affects us all. We’re delighted that this powerful resource is now available to the nation’s scientists, and we’re looking forward to new discoveries in climate, weather, space weather, renewable energy, and other critical areas of research.”