Myth exploded: No, an active anti-tank missile was not found in a Czech server room

This story took off, but turned out to be a dud

Yesterday, a maintenance worker in the Czech Republic claimed to have stumbled across something rather unusual in a rarely visited server room: An active anti-tank missile.

After receiving several messages about the bomb on our tip line, we were tempted to cover the story, but something didn’t feel quite right. Now, we can confirm the story was just a hoax.

Tanks, but no tanks 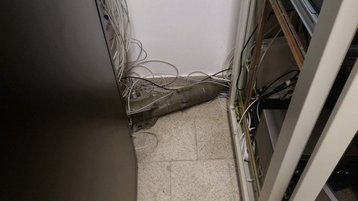 On the Reddit page ’WhatIsThisThing,’ user WhySoSadCZ shared a picture of what looks like an AT-3 Sagger 9M14 Malyutka wire-guided anti-tank missile in a server room, pictured right.

He said: “I am doing some air-condition maintenance in an small business office building. No one was in that server room for more than 2 months since the last IT guy left and apparently took the keys with him. AC gave up, found out there are no spare keys, had to break in and found this. Farewell present from a former employee maybe?”

WhySoSadCZ says the maintenance worker then called the police, with a bomb squad arriving soon after. He said: “Bomb squad will try to remove the device if it is not wired and transport it to some safer place, we are on our way to a police station. Some black vans with no registration plates on the scene, few military cars. It looks like a complete military lockdown. Crazy stuff…”

He later added: “It was an active anti tank missile, bomb squad was not authorized to manipulate with it, military bomb squad had to be called, it is being transported to a nearby military area where they are going to detonate it.

“I could [not] get any more info about it being wired or how did it even get there but hopefully will be able to get some more info from an owner of that factory, will keep you updated.”

Naturally, the sheer oddity of the alleged incident, plus the frisson of danger it heralded, took that post quickly to the front page of Reddit, the sixth most visited website in the world, according to Alexa.

From there, the story spread to social media channels, and was soon picked up by several publications - some of which shared their skepticism, some of which did not.

Regional publication Lupa contacted the Czech police, which denied knowledge of the incident. WhySoSadCZ claimed that there was an embargo on the news - which seemed strange, as perusing the Czech police Twitter handle finds mentions of plenty of other explosives.

The police have now officially denied the incident, and WhySoSadCZ has come clean. He wrote: “Thank you guys for being part of the biggest reddit bamboozle of 2018, it was all just a made up story to make your day a little more exciting!”

Don’t trust everything you read on the Internet (stick to magazines!). However, strange things besides bombs have found their way into a server room - they have also been plagued by cats, motor bikes, and ghostly apparitions.

And one mystery still remains: WhySoSadCZ says he found the picture on Facebook. How did it get there?