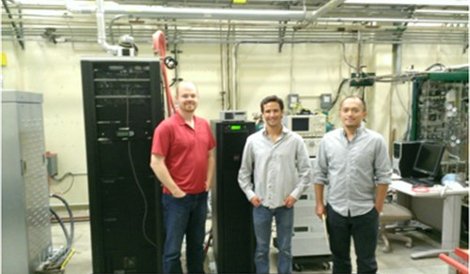 Microsoft and a California university have managed to successfully power a 12kW rack of servers by a fuel cell installed in the rack itself, eliminating droves of electrical infrastructure equipment and demonstrating a dramatic improvement in energy efficiency as a result.

Efficiency of the power chain, from the fuel cell to the server, went from about 40% to more than 53%, compared to running a regular centralized fuel cell plant outside the computer room, since the energy went through fewer conversion steps.

In typical set-up, a fuel cell’s output power goes through a DC-to-DC converter to stabilize voltage fluctuations. It is then converted to AC since that is what most appliances use.

Actual electronics in servers, however, use DC power which is produced by circuits that convert incoming AC.

“Using an off-the-shelf fuel cell system, we cut out the power regulation circuits and bypassed the AC-DC rectifier circuits in the server and powered each server directly off the fuel cell stack,” Sean James, a Microsoft research manager, wrote in a blog post. “Then we subjected the system to transients, powering up and down servers, etc. Nothing broke.”

Fuel cell vendors like Bloom Energy and ClearEdge have been marketing their generation systems to data center operators over the past several years and have achieved some success. Customers including eBay, JPMorgan Chase, Apple, Verizon, CenturyLink (formerly Savvis), AT&T and NTT, among others, have deployed fuel cells to power their data centers.

In 2013, eBay announced that its latest data center in Salt Lake City, Utah, was getting its entire load from fuel cells. The company claimed the approach was more energy efficient and cost effective than buying utility power in that location.

The rub is that fuel cells are expensive, and conventional wisdom has been that the approach does not make economical sense for a data center unless the project gets government incentives. The US federal government provides some tax incentives for fuel cell purchases and so does a number of state governments.

James, in his blog post, argues that if one takes into account the energy losses that occur between the time gas enters a utility-scale generation plant and the time energy reaches a server in a data center, using fuel cells on site actually ends up being cheaper.

If considered by itself, electricity from an on-site system that is nearly twice as efficient as the conventional method of getting energy is more expensive. But if savings from not having to install all the electrical infrastructure, from power plant to the plug in the wall, are taken into account, it becomes much cheaper.