Microsoft defends working with the US military: "They will have access to the best technology that we create"

Microsoft has come out in defense of working for the Department of Defense, after staff published an open letter claiming "many Microsoft employees don’t believe that what we build should be used for waging war." 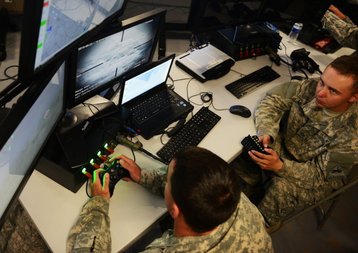 "We believe in the strong defense of the United States and we want the people who defend it to have access to the nation’s best technology, including from Microsoft," Smith said.

"Second, we appreciate the important new ethical and policy issues that artificial intelligence is creating for weapons and warfare. We want to use our knowledge and voice as a corporate citizen to address these in a responsible way through the country’s civic and democratic processes. Third, we understand that some of our employees may have different views. We don’t ask or expect everyone who works at Microsoft to support every position the company takes."

The controversy arose after Microsoft said it would bid for the Joint Enterprise Defense Infrastructure (JEDI) cloud, a single-award government contract that will see almost all of the Department of Defense's cloud computing needs fulfilled by just one vendor, for up to 10 years, in exchange for as much as $10bn. John Gibson, the Pentagon’s chief management officer, described the contract as an effort to "increase lethality and readiness."

"We readily decided this summer to pursue this project, given our longstanding support for the Defense Department," Smith said. "All of us who live in this country depend on its strong defense. The people who serve in our military work for an institution with a vital role and critical history. Of course, no institution is perfect or has an unblemished track record, and this has been true of the U.S. military."

Google employees were among the most vocal in opposition of working with the DoD, with thousands signing a petition against it, and dozens quitting in protest. As a result, the company released a set of 'AI Principles' that attempted to specify just how far the company would go in working with the military. Citing those principles (and the fact that Google Cloud lacked the necessary certifications to compete), Google pulled out of the running for the JEDI cloud contract.

"We appreciate that technology is creating new ethical and policy issues that the country needs to address in a thoughtful and wise manner. That’s why it’s important that we engage as a company in the public dialogue on these issues," Smith said.

"Artificial intelligence, augmented reality and other technologies are raising new and profoundly important issues, including the ability of weapons to act autonomously. As we have discussed these issues with governments, we’ve appreciated that no military in the world wants to wake up to discover that machines have started a war. But we can’t expect these new developments to be addressed wisely if the people in the tech sector who know the most about technology withdraw from the conversation."

Amazon CEO Jeff Bezos, whose company is widely perceived as the frontrunner in the JEDI contract, made similar comments earlier this month. “If big tech companies are going to turn their back on US Department of Defense, this country is going to be in trouble,” he said

“We are going to continue to support the DoD and I think we should.”

JEDI, meanwhile, is embroiled in another, completely unrelated, controversy - it is beset by allegations that the contract was designed with Amazon Web Services in mind, fueled by intense lobbying from IBM and Oracle, among others.