The Goodyear, Arizona facilities will mark Microsoft's fifth availability region in the west coast of the US

Microsoft plans to build data centers in Goodyear, west of Phoenix Arizona, on two sites it acquired over the past year, according to reports on local news site AZ Central.

Microsoft bought the first site, just south of Goodyear Airport, in August 2018 for $48 million, and added a second $37 million site ten miles away in April 2019. 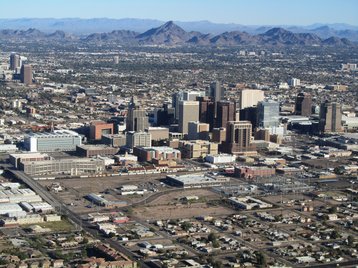 The sites will be Microsoft’s fifth cloud availability region in the West Coast of America, joining existing regions in West Central US, Utah, West US 2 in Washington State, West US in the San Francisco Bay Area, and US Gov in Arizona.

In an email to AZ Central, the Microsoft spokesperson said: “As part of our plans to support the growing demand for cloud and Internet services in Arizona and across the Western United States, Microsoft recently purchased land at two locations in Goodyear, Arizona where we intend to develop world-class data center facilities."

Public documents previously called the project a “five-building technology center,” so it could be possible that Microsoft plans to build three more buildings on the sites - but they might not necessarily be full data halls.

The development agreement for the facilities notes that each site could use up to one million gallons of water per day. A Microsoft spokesperson contacted DCD to point out that this is a peak figure only and the planned data centers will use zero water for cooling for more than half the year.

"The water consumption in design documents filed with the City of Goodyear contain maximum daily consumption and actual water consumption will be much less," said the spokesperson. "Our design uses outside air for cooling when temperatures are below 85 F instead of water. When temperatures are above 85 F, an evaporative cooling system is used. This system is highly efficient, using less electricity and a fraction of water of other water-based cooling systems, such as cooling towers.”

A separate statement said: "We have made long-term commitments to sustainability - using the power of our technology to minimize the environmental impact of our products and operations. Microsoft has been carbon neutral since 2012 and continues to make progress toward our goal of cutting our operational carbon emissions by 75 percent by 2030."

Goodyear Airport is a storage and maintenance site, which is not served by any airlines. The airport itself is a "Superfund" site, meaning that the land is polluted from its previous use as a military facility.