Microsoft and Amazon have both signed power purchase agreements (PPAs) with renewable energy providers to compensate for the fossil-based energy used by their data centers. 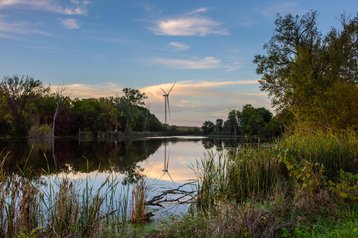 Last week EDF Renewable Energy announced that the Pilot Hill Wind Project, a 175MW wind farm located in Illinois 60 miles southwest of Chicago, in Kankakee and Iroquois counties, had reached operational status at the end of September 2015, almost exactly one year from the start of construction.

The facility has the benefit of having a 20-year power purchase agreement in place with Microsoft, which allows Microsoft to claim that its Chicago data center, which provides, among other things, a large Azure cloud presence, is powered by renewable wind energy.

The 103 General Electric wind turbines used to generate the 175 MW of power reduce carbon emissions by as much as 374,000 metric tons per year when compared to traditional energy generation such as natural gas or coal.. According to the EIA, the energy generated is enough to power 60,000 homes and because of the PPA with Microsoft will offset the energy demands of a single data center.

Amazon has a public commitment to move completely to renewable energy, but has taken considerable heat from organizations like Greenpeace for a perceived lack of urgency or a clear roadmap to this goal.

It has now taken a step towards meeting its promise, but signing a PPA with a planned 100 MW wind farm in Paulding County, Ohio, which will offset some of the energy demand of forthcoming Ohio data centers, of which Amazon is building no fewer than three, with a possible fourth being built in the state capitol.

Neither wind nor solar power is directly suitable for powering data centers, due to the fluctuating nature of the power provided. While pilot projects are afoot to use battery technology to build a resoivoir of energy to allow a consistent power supply from such facilities, the current state of power generation technology means that claims of having a data center powered by wind or solar really means that the claimant is offsetting non-renewable energy iuse by investing in PPAs such as these.