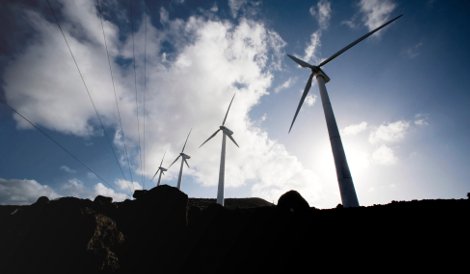 In trying to reduce the carbon footprint of its data centers and operations in general, Microsoft has taken a page out of Google's green-infrastructure playbook. It has signed a long-term power purchase agreement with a wind farm developer to offset carbon emissions associated with its operations, including its massive San Antonio, Texas, data center, which is plugged into the same utility grid the wind farm will be part of.

The company has agreed to buy all energy the future 110MW wind farm will generate over 20 years of operation. RES Americas, the developer behind the Keechi Wind project, plans to start construction of the farm in 2014 and start generating power the following year.

The 477,000 sq ft San Antonio data center will not receive energy from the wind farm directly. Brian Janous, director of energy strategy at Microsoft, says the company will apply renewable energy credits (RECs) that come with every kWh generated to electricity consumed across all of its operations.

“Microsoft will apply those REC’s toward the electricity consumed across our footprint, offsetting any emissions that resulted from carbon-based sources of electricity,” he writes in an email to DatacenterDynamics FOCUS.

The wind farm will bring additional renewable energy to the local utility grid, Janous says. Whether a renewable project would have been built without the customer contract is an important point to consider when weighing the project's potential impact on climate change.

According to Rob Bernard, Microsoft's chief environmental strategist, it would not. “Because this is a new project, the energy generated there is 'additional,' which means that our purchase is bringing new renewable energy onto the Texas electric grid,” he writes in a blog post announcing the deal.

Making sure the renewable energy project you are investing in is additional is “the way it should be done,” Koomey says. In June, the scientific journal Nature published a paper Koomey co-authored on the subject of greenhouse gas emissions associated with data centers.

Google has done deals like this for several years in states it operates large data centers in, including Iowa and Oklahoma. Because state utility regulations preclude the company from feeding clean energy directly from the source to its data center or office buildings, it sells the energy on the wholesale electricity market after having stripped the RECs that come with it.

Google then applies the RECs to energy it buys from a utility to power its operations, thereby reducing its overall contribution to climate change.

Utility regulations in Texas have forced Microsoft to go through a similar scheme. “Texas is like most other power markets, in that generators are typically not able to contract directly with consumers,” Janous says. “Consumers typically interact with an intermediary like a utility or a retail supplier, which may or may not own generation.”

KC Mares, an energy procurement consultant who has worked on power purchase deals by some of the world's largest data center operators, such as Equinix, Google, Yahoo! and Exodus Communications, said such regulations are an unfortunate reality companies that do want to reduce their carbon emissions have to deal with. “I think it's a travesty that we do not – to this day – have the ability as consumers of electricity to choose not only whom we want to buy electricity from but also the type of electricity,” he said.

Long-term power purchase agreements like Microsoft's and Google's are one of the ways for a company to reduce data center carbon emissions. It is not as good an option as generating clean energy on-site, Mares says, but on-site renewable generation is very challenging, especially for data center operators.

Microsoft has already done the first major step in this pursuit, which is reducing the amount of energy its data centers consume, Mares says. The company is known for its innovative energy efficient data center and IT equipment designs.

“Really, the next step is to then buy cleaner electricity, and so that is what they're doing,” he says.

To date, companies that have embarked upon substantial on-site generation projects for their data centers have opted for natural-gas-powered fuel cell installations. They include Verizon, AT&T, CenturyLink-owned Savvis, NTT America, Apple and eBay, among others.

While a lot cleaner than coal, natural gas is still a fossil fuel and is not generally considered a good source of renewable energy.

eBay has both, an on-site natural gas fuel-cell plant at its newest Salt Lake City, Utah, data center and a long-term power purchase agreement with a developer of a nearby renewable energy project. Uniquely, the company has successfully lobbied the state government to change the law and allow it to use electricity from that plant directly.

The 55-turbine wind farm Microsoft will be buying energy from will be located 70 miles northwest of Ft. Worth, Texas, near the Town of Jacksboro. The turbines will be manufactured by the Danish company Vestas Wind Systems, mostly at its Colorado plants.

Microsoft made a public commitment to becoming completely carbon-neutral in 2012. In that announcement, the company described one of the tools it would use to achieve that goal as a carbon fee.

Much like government carbon-emission allowance programs, the company makes its internal departments pay fees for carbon emissions associated with their operations. Now, funds raised through those fees will pay for a part of the Texas power purchase agreement.

Microsoft plans to use its carbon-fee system to fund future renewable-energy purchases, Bernard writes in his blog post.