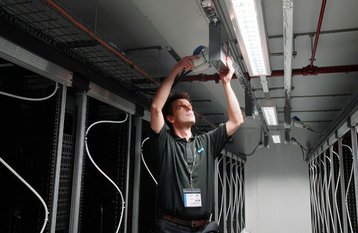 The Perth 2 facility opened in 2013, and has an IT load capacity of 2.3MW and a target PUE of 1.1.  It has Uptime Tier III Design certification, and plans to also get constructed facility certification.

“We anticipate the next phase of our datacentre expansion in Shenton Park, which will triple the current size, will be completed early next year,” said Metronode CEO David Yulie, who also told Computerworld that this expansion had been brought forward a year to meet demand.

The company has nine data centers in Australia, and has been growing rapidly, with  a recent expansion in Illawara and plans for AU$34 million data adding a facilities in the Australian Capital Territory - an enclave within New South Wales.

Metronode bases its data centers on a modular system developed by BladeRoom in the UK, and operates as a local distributor for the UK firm. With a building program in place, Metronode began manufacturing the BladeRoom units locally in 2014.

Earlier this year, BladeRoom launched a lawsuit against Facebook, claiming the social media giant had stolen its trade secrets to build its data center in Lulea Sweden.