Enterprise Edition of Mesos-based DCOS exits beta. There’s a free version, but only on Amazon

DCOS is based on Apache Mesos kernel, an open source project that abstracts CPU, memory, storage and other resources so they can be treated as a single pool. It adds in other components, including Chronos, Marathon and Google Kubernetes to produce an enterprise edition, which will be available for a subscription, including future updates. An open source “community edition” will be available for free on AWS, and allows users to aggregate their Amazon Elastic Compute Cloud (EC2) instances into one pool of resources. 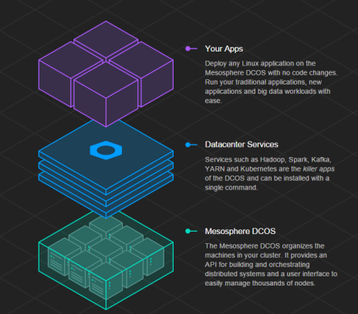 Companies using Mesos or DCOS already include Twitter, Yelp, Groupon and Apple’s Siri. The DCOS Enterprise Edition comes after around nearly 4000 users tried out the beta, and includes features they demanded, says Mesosphere. It is available for private clouds, public clouds and of course hybrid clouds.

DCOS Enterprise Edition is supported on “all modern versions of Linux” - by which Mesosphere means CentOS, CoreOS, Red Hat and Ubuntu - and on every major cloud provider. It can run on bare metal or virtualized servers, and also supports Docker containers to deploy applications.

“Mesosphere’s vision has been to make the datacenter as easy to use as a laptop – and with the general availability of DCOS Enterprise Edition, we’ve taken a huge step toward realizing that,” said Florian Leibert, CEO of Mesosphere. “Applications in the datacenter are driving requirements for a new class of operating system and enterprises need a flexible, scalable, and consistent way to deploy and manage large-scale distributed systems on-prem, in the cloud, or hybrid.”

The Enterprise Edition has 24 hour support, and includes new features such as production-grade Kerberos security for authentication and authorization, and easy installation for DCOS services including HDFS (Hadoop), Cassandra, Spark and Kafka.

It is suitable for hundreds up to tens of thousands of nodes, and Mesosphere promises it can deliver up to 90 percent utilization of resources.

The free community edition is only on AWS for now, but will be on Google Cloud and Microsoft Azure later this summer.

Plenty of companies are using the free Apache Mesos, including Airbnb, Apple, Cisco, Ebay, Ericsson, Groupon, Yelp, Time Warner Cable and Twitter - and Mesosphere says a lot of them are upgrading DCOS to get full support and more features.

One of theses is Yelp, which has used Mesos and DCOS on AWS in a hybrid cloud deployment of services which complement its private data centers. Yelp has a Mesosphere cluster, on which it cooled up a Docker-based microservices architecture called PaaSTA, that lets is shift around millions of container-sized jobs.

“We have been early adopters of Mesos and we’ve had the pleasure of watching Mesosphere drive innovation in the Mesos community with its vision for a Datacenter Operating System built around Mesos,” said Michael Stoppelman, SVP engineering at Yelp. “We’re already using parts of Mesosphere’s DCOS – for example, Marathon – as a key part of our new infrastructure, and we’re excited to be a part of growing community of Mesos and Mesosphere users.”

Cisco also welcomed it, with cloud CTO Ken Owens saying: “Cisco knows first hand the complexities in the datacenter, and we’ve seen how the Mesosphere DCOS changes the game for enterprises.”

The Amazon partner network has a blog on how to use the Community Edition of DCOS.