Lefdal Mine leases another 4MW to existing clients

There’s a world going on underground

Norwegian colocation data center Lefdal Mine has signed 3MW and 1MW contracts with existing customers, bringing it ever so slightly closer to the dream of being the operator of Europe’s largest data center.

The addition, which brings the site to over 8MW, makes it the largest data center in Norway, the company claimed.

A mountain of data 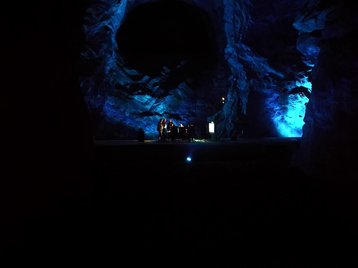 Lefdal has signed a 3MW contract with Innovo Cloud, a German company part-owned by Rittal, which also owns a stake in Lefdal.

“One of the advantages at Lefdal Mine Datacenter is that we are free to choose which DC Tier Level we need,” Innovo’s CIO and cofounder Stefan Sickenberger said.

“This gives a huge flexibility with regards to underlying business models and cost calculations, since we can use a lower DC Tier for low SLAs and higher DC Tiers for high SLAs.”

Another 1MW came from Fortuitus, a Swiss technical infrastructure project financing company, which earlier this year announced plans to host 4MW of HPC hardware for financial applications. At the time, sources told DCD the company would be working on cryptocurrency mining.

“Lefdal Mine Datacenter is the most cost-efficient data center we have found,” Mark Collins, CEO at Fortuitus, said.

“In addition, they offer an unprecedented scalability where we can add large scale capacity in a short period of time.”

We visited Lefdal when it opened in May and detailed its promise: low cost energy, cooling provided by an adjacent fjord, a huge amount of space for expansion - as well as its drawbacks, namely the distance to travel to the facility, and the distance for data to travel to population centers.

So far, business has come primarily from Lefdal’s investors - Rittal and IBM, with Fortuitus currently the only other client. But the company hopes to grow further, and eventually run the largest data center in Europe.

Set in a disused Olivine mine, the facility has a potential capacity of 45MW, but it has the option of expanding to two more floors of the mine, growing to 200MW.

“We are experiencing a massive interest in our product,” Jørn Skaane, Lefdal Mine Datacenter CEO, said.

“The combination of high security, low cost, scalability and green solutions have put us on the international radar.”