Korea Telecom (KT) is testing an AI system that minimizes the energy use in one of its data centers, and plans to roll the idea out to other facilities in 2022.

The telco has developed an AI Internet data center (IDC) operator, which it is testing in its Mokdong IDC 2 facility, and plans to use it in other facilities next year, according to an environment, social and governance (ESG) report published on its site. It's a development from a system designed to cool offices more efficiently. 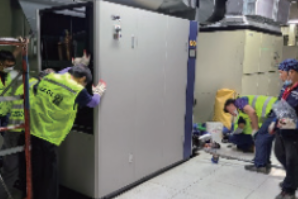 Most of KT's emissions (73 percent) come from its telecoms network - and these emissions are increasing due to the rollout of 5G, according to the report. However, KT says it is "continuously replacing low-efficiency network equipment with high-efficiency equipment, and reducing electricity consumption by optimizing the operation of 3G/LTE base stations and repeaters by time zone."

The company plans to have monitoring systems to track its network's emissions within the year.

KT's 13 data centers in Korea make up a smaller proportion (about 22 percent) of the telco's emissions, and the company is working to reduce these by improving temperature control and using better-constructed air conditioning units. The Yongsan IDC completed in 2020, for instance, was built for efficiency, says KT, with a cold water thermostat, pre-cooling, and inverter methods.

In 2020, KT developed "AI Operator," an AI system that optimizes energy use in offices, by controlling the air conditioning. This year, the telco plans to develop this producing an 'AI IDC Operator,' which can automatically control the cooling and ventilation systems in a data center, with reference to outside weather, temperature, and humidity.

"KT is advancing its technology to apply this technology to IDCs with different power usage patterns," says the report. "After completing the solution development in 2021, it is planned to test the effect by applying it to the Mokdong IDC 2 Center, and to expand the application to other IDCs from 2022."

The use of AI to optimize data centers has a considerable history, but some early applications seem to have disappointed in the long term. Back in 2016, Google claimed to have used its DeepMind AI to reduce its data center PUE by 15 percent (corresponding to a cut in cooling energy of around 40 percent). However, Google's initial promises to roll this out more widely and to share the ideas have come to little. Meanwhile, Huawei is promising its own AI agents are making its data centers more efficient. along with several other data center operators.

Elsewhere in Korea Telecom's report, the office emissions give an idea how energy-hungry data centers are compared with ordinary office space. The telco's 516 office buildings in Korea add up to only three percent of the telco's total emissions - a small fraction of the emissions from its 13 data centers. Within these buildings, KT is shifting to more efficient boilers and LED lights. The AI Operator management system was first deployed at the Gwanghwamun East office, and demonstrated greater efficiency than conventional building management systems, KT says.

Both AI operators work by learning the structure of heating and cooling systems and monitoring the status of indoor space. They learn from existing energy consumption patterns, and automatically control the amount of heating (or in the data center cooling) energy needed through real-time analysis.

During 2021, while the data center version is being developed, the office version of the AI Operator will be applied to six KT offices and then rolled out further in the future.

On the roads, KT operates 6,000 vehicles, which produce two percent of its emissions. By 2020, the telco had swapped 1000 of those vehicles for electric ones.