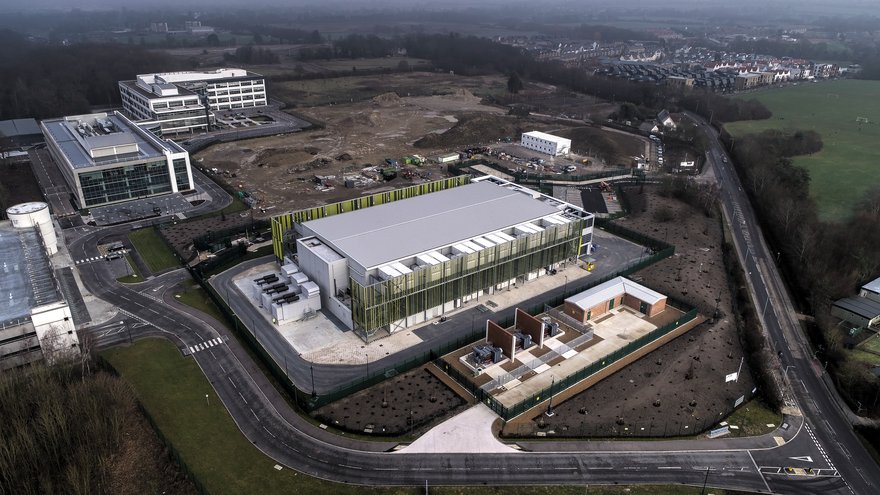 The Kao Data facility North of London has opened, and the company has appointed a new chairman: industry veteran Craig Wilson. The site has 2.2MW of capacity available in an 8.8MW powered shell, and the potential to go up to 35MW on the site.

Craig Wilson has a long history in IT services: he was at EDS (UK) when it was acquired by Hewlett-Packard, became head of HP Enterprise Services in the UK, before accepting the role of CEO of Xchanging PLC and then UK head of CSC.

The official opening gathered a sizable crowd, who toured the facility and heard talks from Peter Hannaford of Datacenter People, and Professor Hugh Montgomery, who spoke about ways in which big data and analytics can help the crisis in healthcare.

The £200 million project on the London-Stansted-Cambridge route, 20 miles north of the London Docklands, is named after Sir Charles Kao, the optical fiber pioneer who worked on the site when it was an STC laboratory. It features an 8.8MW powered shell in which a 2.2MW data center is ready for customers.

Kao London One offers concurrently maintainable site infrastructure, using indirect evaporative cooling to reach a PUE below 1.2, the company claims. The site has a maximum power capacity of 43.5MVA from the UK Power Networks (UKPN) national grid substation in Harlow West, which in turn gets its supply from the 400kV Rye House Bulk Supply Point on the National Grid. The power comes over a 5km route on three 33kV circuits supplying a 30MvA transformer inside the Kao Data Park.

Campus power systems include N+1 backup diesel generators with dedicated fuel tanks, ensuring operation at full load for at least 24 hours and a maximum of 48 hours, with priority refuelling contracts in place. In the event of a power failure, there are two redundant power supply systems available with battery power for a minimum of 5 minutes, to give the diesels time to start.

In the rented space, the customer can have 230V and 400V power supply options with independent phases.

For cooling, the site has both free-cooling and N+1 indirect evaporative cooling (IEC) units. Customer cabinets can have densities up to 20kW, in enclosures with hot aisle containment and a delta-T of 12°K.

To prevent fires, the site has automatic fire detection systems throughout, linked to the central building management system (BMS) so operators get early stage warnings before the normal first and second stage alarms. The data center is also equipped with a double-knock, water-mist fire suppression system.