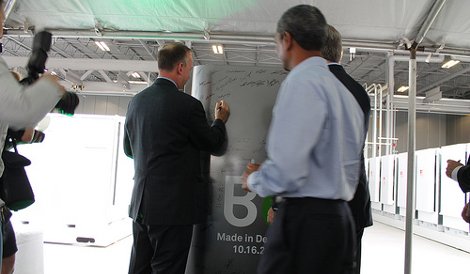 JPMorgan Chase is planning to deploy a 500kW installation of Bloom Energy fuel cells at a campus in Delaware, which will provide power for the financial services giant's data center.

Company officials announced the deal for the installation at the financial firm's Morgan Christiana site in Newark Wednesday at an event that celebrated the opening of Bloom's new manufacturing facility in the same city. The factory has been shipping gas-fueled Bloom boxes since this summer.

Bill McHenry, global head of property operations at JPMorgan, said the manufacturing plant's location would make it easy for JPMorgan to access maintenance and monitoring engineers for the Morgan Christiana site. The deployment is a pilot for the financial services company, which it hopes to expand in the future.

“We are able to not only improve our facility right here in Delaware, but also fulfill our company-wide commitment to investing in new technologies designed to reduce our impact on the planet,” McHenry said.

Peter Gross, who runs Bloom's mission critical business, told us in a recent interview that while the core fuel-cell technology was the same in both product lines, solution architectures were different.

The grid-parallel products are designed to contribute electricity to the electrical grid and are supposed to shut down in case there is a grid outage. The mission-critical product, however, is made to continue operating during utility outages because they supply electricity directly to mission-critical facilities that cannot afford to lose power completely, Gross explained.

eBay's is the only data center that gets 100% of its power this way, Gross said.

The product has been gaining traction in the US data center market primarily because the cost of natural gas in the country is at a historic low. Dean Nelson, the man in charge of infrastructure at eBay, told us in a recent interview that it was simply cheaper for the company to buy natural gas and convert it to electricity at the new Utah site than it would be to buy utility power for the facility.

For an in-depth article on the new eBay data center, see the upcoming issue of DatacenterDynamics FOCUS, out in early November. Get your free subscription here.

Delaware governor Jack Markell gave a speech at the plant opening event in Newark, praising the economic impact he expected the Bloom plant to have on local economy.

“This is the new face of manufacturing, and we have it right here in Delaware,” he said. “The growth of innovative companies like Bloom and of new, high-tech manufacturing is necessary to move Delaware’s economy forward.”

According to a statement released by the governor's office, Bloom said it was planning to hire more than 100 new workers at the facility.