Distributed HPC system is primarily located at Indiana University, along with four other sites

A collaborative cloud system across five institutions, the supercomputer can deliver an aggregate peak performance of 8 petaflops, and has been supported by a $10 million National Science Foundation grant, awarded in June 2020. 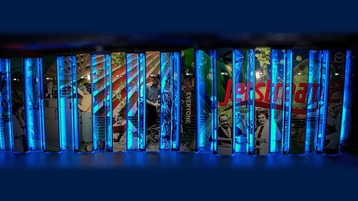 The Jetstream2 system overview states that because of this distributed hardware, ‘While it shares many common features and abilities with other research computing resources, it is not a traditional High-Performance Computing (HPC) or High Throughput Computing (HTC) environment.’

It has been created primarily for interactive research, small-scale processing on demand, and as a backend to science gateways to send research jobs to other HPC or HTC resources. The overview further states that Jetstream2 can be used for ‘prototyping, for creating tailored workflows to either use at smaller scale with a handful of CPUs or to port to larger environments after doing your proof of concept work at a smaller level.’

The HPC system’s standard compute nodes are each equipped with dual AMD Epyc Milan 7713 CPUs and 512GB of memory, while 32 additional large-memory compute nodes with a terabyte of memory each. The 90 total GPU nodes have the same CPUs, 512GB of memory, and quadruple Nvidia A100 GPUs. All told: around eight aggregate peak petaflops of cloud compute power supported by 17PB of storage. All hardware has been built by Dell.

The Jetstream2 comes after its predecessor, Jetstream, another HPC system that launched in 2016 and consisted of 640 Intel Haswell-based nodes split between Indiana University and the Texas Advanced Computing Center.

John Fonner, director of special projects at TACC said of Jetstream2: “It will provide flexible advanced computing capabilities for researchers that may not otherwise have sufficient resources at their institutions. And it gives educators a consistent, accessible compute environment that they can bring into the classroom.”

The Jetstream2 went through early operations in February 2022 when it was integrated into the NSF’s ACCESS program (Advanced Cyberinfrastructure Coordination Ecosystem: Services & Support), the successor to the popular XSEDE program.

David Hancock, director of advanced cyberinfrastructure at Indiana University said: “We intend Jetstream2 to be a democratizing force within the NSF ecosystem, allowing researchers and educators access to cutting-edge resources regardless of project scale.”

In the latest DCD magazine, we cover the future of on-premise supercomputing in the age of the cloud and exascale computing. Read it here now for free.