American data storage and management specialist Iron Mountain has opened its first facility in Northern Virginia - the largest, fastest growing market for data centers in the US.

The first out of four planned building on campus in Prince William County offers 165,000 square feet of space and 10.5MW of power capacity - more than half of which has already been pre-leased.

One of the first major customers in the facility is Virtustream - a cloud business that started as a joint venture between EMC and VMware and is now a part of Dell Technologies.

The opening ceremony was attended by a number of county and state politicians including Governor Terry McAuliffe and Virginia Senator Jeremy McPike.

“We are honored to have such a dynamic global leader like Iron Mountain continue to invest in the Commonwealth aiding our efforts to build a new Virginia economy,” McAuliffe said. 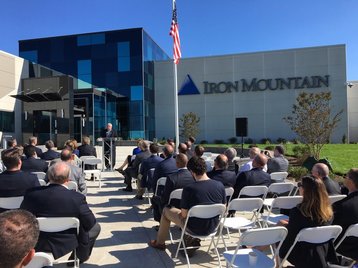 Northern Virginia has emerged as one of the most attractive data center markets in the US thanks to its location on the East Coast that benefits from transatlantic cable links, low taxes, cheap power and close proximity to the government departments in Washington.

The entire project is expected to cost $350 million, with the company having already invested $80 million in the first phase.

The facility has been Tier III certified by the Uptime Institute and complies with a variety of standards like ISO 27001, FISMA High, PCI-DSS Level 1, HIPAA, SOC 2 Type II and SOC 3 - which are especially important if you are looking to bid for government contracts.

“This data center, like our others, is especially suited for heavily regulated enterprises, cloud providers and government agencies who seek a highly secure, highly compliant environment for hosting their data center operations,” said William Meaney, president and CEO of Iron Mountain.

“With this new facility, we enter the hottest data center market in the US and add further capacity for serving existing and new governmental customers, a group where our brand for security, service and compliance resonates particularly well. Together with our existing data centers and recent acquisitions, this data center helps to further accelerate our fastest growing business segment.”