A single hop to turning things around

INAP operates 51 data centers across 21 metropolitan markets and maintains 90 points of presence (PoPs) around the world.

The deal is meant to revitalize the company, which has struggled of late - in its third quarter, ending November 2017, revenue was down 6.8 percent year-on-year. 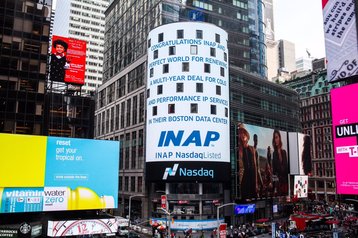 A tuck-in acquisition describes a deal where the acquired company is merged into a division of the acquirer.

Aquino continued: “Today we announce significant progress on both fronts: We are reporting a positive outlook for 4Q 2017 revenue, which is up sequentially, and we are ahead of turnaround expectations. We are also pleased to announce the signing of an agreement to acquire SingleHop and welcome their customers and employees to the INAP family.”

The companies anticipate annualized cost synergies of $2 to $3 million, and SingleHop is expected to contribute $45 to $50 million in annualized revenue to the INAP business post closing.

Zak Boca, co-founder and CEO of SingleHop, said: “These two companies are extremely complementary, and together will offer customers an incredibly robust, modern IT platform, which was backed by investment firm Battery Venture.”

Following the acquisition, Boca will become the chief marketing officer of INAP. The deal is expected to close before the end of the first quarter 2018, with the transaction underwritten by Jefferies Finance.