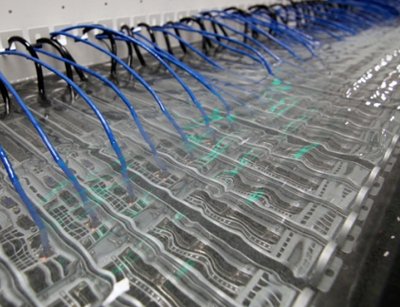 A year-long test carried by Intel, which was keen to understand how submersion cooling can reduce IT and data center energy, has proved liquid cooling of servers can reduce power usage effectiveness (PUE) without damaging equipment.

It found the servers could run with a PUE of 1.02 to 1.03, which when compared to typical air-cooled servers - which run at an average of 1.6 - provides a compelling energy saving.

Part of this is because submerged servers require no fans, or energy-intensive air cooling.

The test results also alleviate concerns that liquid can damage parts. Intel could not identify any adverse mechanical effects from submersion – at least in the first year of the servers being dunked.

Intel carried out the test at its Rio Rancho facility in New Mexico using Green Revolution Cooling’s system, which is made up of a mineral oil which has a capacity almost as good as water’s.

The no-conductive GreenDEF direct coolant is optimized for use with servers and other data center hardware.

Already in commercial use

Green Revolution’s Carnotjet solution, as it is marketed, was first used by Midas Networks, which purchased 42U racks back in 2010.

It has been using servers developed by Green Revolution Cooling and Super Micro Computer.

In this case, the company said it had managed to eliminate all air condition costs in its data center.

Airing out the facts

Green Revolution Cooling told FOCUS Intel set out to understand how submersion cooling could reduce IT energy in the data center in particular infrastructure components.

It compared air cooling and submersion cooling using Green Revolution equipment for the test, and also looked closely at the changes to IT equipment that occur as a result of immersion cooling.

It found that submerged servers can run at higher temperatures (in the CCGVeritas case, they are running at 40C) and that they use less energy at platform level due to the lack of fans and reduction in the leakage of currents in mineral oil coolant.

For its air-cooled tests, Intel uses an identical system. In both instances it placed the servers under conditions of stress.

Green Revolution Cooling said the tests prove that liquid cooling solutions have a more advanced heat recovery and that these systems can operate without a conditioned space.

It also paves the way for cheaper servers, with liquid cooled servers having much simpler architectures.

And for high density use, servers could, essentially, run faster while using less energy.