Intel has developed a silicon-based quantum computing chip that can be manufactured using conventional foundry techniques.

The ‘spin qubit processor’ is made with isotopically pure silicon wafers, and uses magnetic resonance to manipulate individual electrons.

The theory behind this approach has been known for a while (detailed maths here), but the company is the first to make it ready for mass production.

Intel says spin qubit machines could help overcome some of the scientific hurdles to take quantum computing from research to reality. 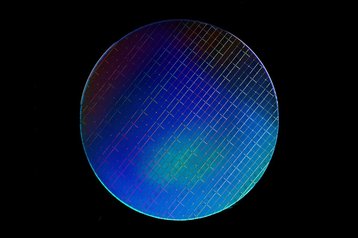 Quantum computers can carry out calculations using quantum bits or qubits. Because quantum states can be superposed, qubits can measure both 1 and 0 simultaneously – just as the famous cat in Schrodinger’s Paradox can be both alive and dead because it is isolated from the outside world in a coherent quantum state.

Intel’s latest quantum computing chip is the result of a collaborative research project launched back in 2015. It focuses on spin qubits, since they are much smaller in physical size and don’t require extremely cold temperatures like ‘superconducting’ qubits used in most universal quantum computer prototypes. Intel is actually working on both approaches, but says spin qubits are less fragile, so their coherence time is expected to be longer.

Here’s how the company explains it:

Electrons can spin in different directions. When the electron spins up, the data signifies the binary value 1. When the electron spins down, the data signifies the binary value 0. But, similar to how superconducting qubits operate, these electrons can also exist in a “superposition,” which means they have the probability of a spin that’s up and down at the same time and, in doing so, they can theoretically process tremendous sets of data in parallel, much faster than a classical computer.

The technology has enabled Intel’s academic partner, QuTech research center at the Delft University of Technology in the Netherlands, to create a two-qubit quantum computer that can be programmed to perform two simple quantum algorithms.

Meanwhile Intel invented the manufacturing process, using isotopically pure wafers sourced specifically for the production of spin-qubit test chips, but the same lithography equipment that is used to make Xeon CPUs. The company said that in a couple of months, it will be able to produce “many wafers per week, each with thousands of small qubit arrays.”

At the same time, Intel acknowledged that there are many more problems to be solved and many more architectural decisions to be made before quantum computing makes practical sense.

Intel it’s not alone in this space: last year, IBM used superconducting circuits to build a 20-quibit machine available for commercial use, and promised a 50-qubit quantum computer ‘in the next few years.’