Intel plans to introduce Broadwell SoC for microservers in 2014 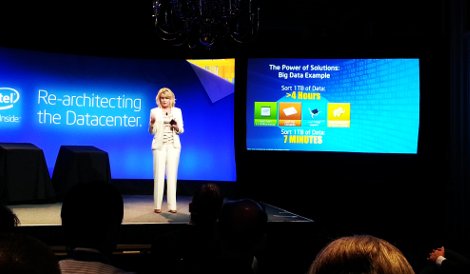 Intel Corp. is planning to launch a new low-power SoC (System on Chip) server card in 2014 based on the 14-nanometer Broadwell microarchitecture.

Diane Bryant, the company's senior VP and general manager of data center and connected systems group, said the SoC will feature integrated IO, fabric and accelerators to provide a solution that is both low-power and high-performance.

Intel announced its first SoC, based on its Atom processors, codenamed “Avoton,” last year. “We are further expanding this product line that has a focus on very low-power, very high-density,” Bryant said.

Jason Waxman, general manager of Intel's Cloud Infrastructure group, said the company had not yet decided what workloads the product would be best for. “We're still letting customers experiment and give us feedback on it,” he said.

The Broadwell SoC will most likely be an extension of the Avoton SoC's play, which is to target the micro-server market for data center operators will low-power, high-compute-density requirements. “The customers we're listening to are both the OEMs (Original Equipment Manufacturers) … and large cloud-service-provider customers,” Waxman added.

Avoton is not Intel's only microserver play. In June, the company announced a new family of Xeon E3 processors, based on the Haswell architecture, one of which (E3-1220L v3) is aimed at the microserver market.

Intel expects to make the Xeon E3 for microservers generally available in the third quarter of this year.

Intel has many competitors in the nascent microserver market, including its traditional rival AMD and numerous newcomers that build low-power processors and SoCs based on designs by London-based ARM Holdings – a company that designs processors for the bulk of the world's mobile devices.

AMD sells microservers based on both ARM and Intel chips, as well as its own. Companies manufacturing ARM processors for servers include Calxeda, Applied Micro, Cavium, Marvell and Texas Instruments.