Intel has revealed a new product family for training artificial intelligence systems, called the ‘Nervana Neural Network Processor’ that is expected to be on sale before the end of the year.

As the name suggests, the chips come out of Intel’s $400 million acquisition of deep learning startup Nervana Systems in 2016, with former Nervana CEO Naveen Rao put in charge of Intel’s AI products group. 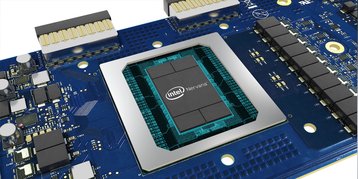 “The Intel Nervana NNP is a purpose built architecture for deep learning,” Rao said in a blog post. “The goal of this new architecture is to provide the needed flexibility to support all deep learning primitives while making core hardware components as efficient as possible.

“We designed the Intel Nervana NNP to free us from the limitations imposed by existing hardware, which wasn’t explicitly designed for AI,” he added, in what could be interpreted as a dig at GPUs which owe their progress to video games.

Rao was coy about chip’s specifics, but did say that “the Intel Nervana NNP does not have a standard cache hierarchy and on-chip memory is managed by software directly,” and that it was “designed with high speed on- and off-chip interconnects” enabling massive bi-directional data transfer.”

He continued: “To achieve higher degrees of throughput for neural network workloads, in addition to the above memory innovations, we have invented a new numeric format called Flexpoint. Flexpoint allows scalar computations to be implemented as fixed-point multiplications and additions while allowing for large dynamic range using a shared exponent. Since each circuit is smaller, this results in a vast increase in parallelism on a die while simultaneously decreasing power per computation.”

Intel CEO Brian Krzanich added in his own blog post: “Using Intel Nervana technology, companies will be able to develop entirely new classes of AI applications that maximize the amount of data processed and enable customers to find greater insights – transforming their businesses.”

He also revealed that Facebook was “in close collaboration sharing its technical insights” as the chip was created.

The NNP was in development by Nervana under the ‘Lake Crest’ codename for the past three years. Should Intel follow the roadmap it detailed earlier this year, it will next release ‘Knights Crest,’ a mix of Intel’s Xeon processor tech and Nervana’s designs.