1000x faster than flash, cheaper than DRAM and works without transistors

Semiconductor manufacturers Intel and Micron are working on a new type of non-volatile computer memory that they say is up to 1000 times faster and more durable than NAND flash.

3D XPoint (pronounced ‘crosspoint’) memory does not feature transistors and does not trap electrons to store data. Instead, it relies on layers of switch and memory cell materials that can permanently change their state.

These layers can be stacked on top of each other to produce storage devices that are 10 times denser than conventional SSDs or RAM, and yet allow every memory cell to be accessed individually.

3D XPoint is already in production, and could appear on the market as soon as 2016, with potential applications in both consumer devices and servers. 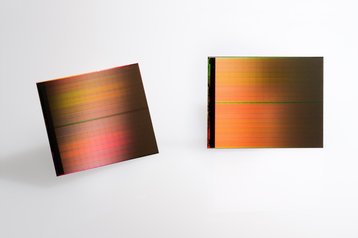 It has long been predicted that data centers of the future will need a new type of non-volatile memory to occupy the space between RAM and flash. Up until now, the most promising candidates were Phase Change Memory (PRAM) and Resistive RAM (RRAM).

Intel and Micron claim 3D XPoint is neither of these: it’s a new, proprietary technology that has been in development for nearly 10 years. 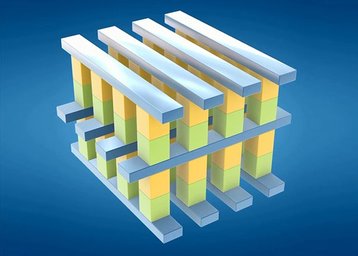 The press release describes 3D XPoint as “a three-dimensional checkerboard where memory cells sit at the intersection of word lines and bit lines.” Each individually addressable memory cell can store one bit of data, and the response time is measured in nanoseconds, as opposed to microseconds with conventional flash.

The technology has been proven to be able to store as much as 128Gb per die across two memory layers.

Intel and Micron say this is the first new memory category to be introduced since researchers at Toshiba invented flash in 1989.

“One of the most significant hurdles in modern computing is the time it takes the processor to reach data on long-term storage,” said Mark Adams, president of Micron. “This new class of non-volatile memory is a revolutionary technology that allows for quick access to enormous data sets and enables entirely new applications.”

Analysis: The press conference on Tuesday was designed to build the hype around 3D XPoint, without giving away any of the essential details. We don’t really know what kind of devices Intel and Micron are building, or how they really work.

The announcements were preceded by a lengthy legal disclaimer, which liberated the executives from any responsibility for their words. And we know Intel has jumped the gun before: to find an example, look no further than the state of perpetually-delayed silicon photonics technology.

But if I had to guess, my money would be on ultrafast storage drives plugged directly into a PCIe or DRAM socket – since no other bus standards can support the potential speeds of 3D XPoint. Some flash vendors including SanDisk and Viking Technologies have already adopted DRAM slots for non-volatile storage, so it would make sense.

If you have other ideas as to what 3D XPoint will eventually become, let us know in the comments.