A new modular data center is planned for the Warrenton Training Center B, a classified US government communications complex in Fauquier County, Virginia. The facility would add to a $200 million data center built there by Amazon subsidiary Vadata, which is due to open later this year.

The project was revealed in a 100-page environmental impact assessment document which was placed in Warrenton public library and spotted by Fauquier Now, the same publication which revealed the Vadata-built facility in 2015.

The latest data center is believed to be similar in size and it’s highly possible that Vadata is building the second facility, though the document reveals no financial details. The deployment will apparently consist of pre-fabricated modules and have some 45MW of backup power. 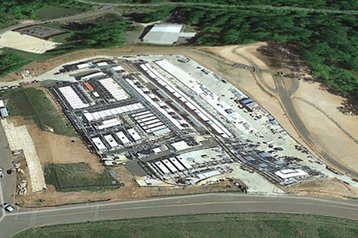 The Warrenton Training Center provides signals intelligence and other services for agencies including the CIA and the NSA - and is also the site of a bunker for US governement use in the event of a nuclear war.

The new data center will be completed in 2020, and have up to 140,000 square feet (13,000 sq m) of space, according to the document, which is quite forthcoming about the physical attributes of the project.

“The data center would include approximately 27 data processing containers, up to 15 three-megawatt diesel engine generators, two smaller generators (each associated with one of the [two] new administrative buildings) along with supporting infrastructure such as air-cooled chillers, switchgear, transformers and telecommunications equipment,” says a passage quoted by Fauquier Now.

The facility will be constructed as a series of “data processing containers”, pre-fabricated and assembled on site, on top of a concrete slab, the document says. They will be around 80 feet long, 65 feet wide and 12 feet tall.

Financial details of the Warrenton data center that’s already under contstruction were revealed in 2015 because Vadata applied for tax exmptions, and got $2.7 million from the Fauquier County Board, to build the $200 million government project. So far there has been no application for tax exemptions on the latest facility, but the application says it will add 20 to 35 staff, to the roughly 50 people to be employed by the first data center.

It will be built in a dense forest northeast of the Vadata installation, with the builders ensuring the necessary forest clearance is kept to a minimum (around 10 to 15 acres), while keeping 500 feet buffers of trees around the facility. The construction work will avoid the breeding season of the Northern long-eared bat. It will also avoid open water that’s hosting a local species of freshwater clam.

The magnificently tight-lipped PR at the training center, Susannah York, apparently made only two comments: “It is on federal property,” she told Fauquier Now.

Commenting on efforts to landscape the site, she added: “Data centers are ugly.”