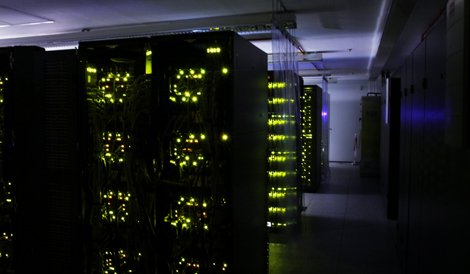 A Polish university has been putting liquid cooling to the test using it to achieve efficiencies while overclocking equipment – a practice which generally blows efficiency levels out the door.

It has found, using Iceotope’s liquid cooling solution which uses a liquid called Novec developed by 3M, that the solution can achieve a power usage effectiveness rating of 1.03.

It did this by separating test environments in the facility and assigning each with a unique PUE.

The Poznan Supercomputing and Networking Center (PSNC) was used to carry out the tests as part of the European PRACE Research Project (Partnership for Advanced Computing in Europe).

Inside the Poznan data center

The project was designed to investigate ways of reducing the environmental footprint of supercomputing operations, especially around computing systems.

It first installed the Iceotope liquid cooled servers in the colocation facility, which provides HPC services to other researchers and universities, in June 2013.

The Iceotope systems run alongside traditional air cooled servers, which are run at higher than normal utilization rates to test their levels of efficiency, Iceotope founder and CEO Peter Hopton said.

“At the PSNC we are able to overclock the machines and still use minimal power resources for cooling,” Hopton said.

“Typically , data center facilities will run their servers at around 40% utilization, meaning that 60% of potential compute capacity remains unused.

At Poznan PSNC, however, the Iceotope system was set up to run at above the 90% utilization, running a highly demanding ‘Linux Stress’ software program designed to assess every aspect of compute including memory, CPU, servers and applications.”

So far the Iceotope system has been used for periods of up to three months, and PUE has been measured over a number of two week periods.

“Running at such a high utilization rate - or overclocking as it is commonly known - means that IT users can run their systems in ‘turbo mode’ and get higher performance rates,” Hopton said.

“This is the complete opposite to how most environmentally friendly IT systems are run as doing so requires the electronics to operate at a much higher temperatures. To avoid damage to the equipment, cooling equipment capable of providing a constant temperature must be used and more often than not, this is a power hungry option.”

Hopton said the system was able to allow the equipment to be run overclocked, with utilization rates of 90%.

He said the typical utilization rate for servers in a data center in 40%.

Much of this is due to the decoupled nature of the system, which separates cabinet and data center connections, offering 2N redundancy throughout the system.

PSNC IT specialist Radek Januszewski said he believes while liquid cooling has not been widely adopted in the space to date, the test indicates the benefits it could bring to high performance computing, where demands on equipment are growing.

“We set up this research project in an effort to establish the benefits of liquid cooling and the results we’ve seen so far are incredible,” Januszewski said.

Iceotope has 46 modules installed alongside the legacy air cooled servers in the 3,200 sq ft PSNC.