Engineers from IBM Research have created a working prototype of a silicon photonics chip, capable of beaming data between racks and servers at speeds of up to 100 Gb/s.

Silicon photonics replaces electricity and copper wire with light and fiber, but in order to function it needs to integrate both electrical and optical components on the same piece of silicon – something that is theoretically possible, but presents plenty of technical challenges.

The technology is expected to play an important part in design of data centers of the future.

“This technology is designed to make future computing systems faster and more energy efficient, while enabling customers to capture insights from Big Data in real time.” 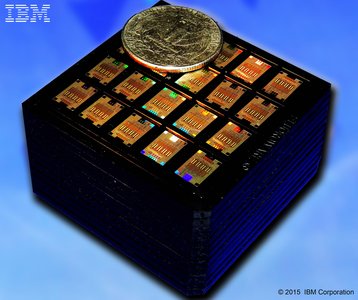 Silicon photonics embeds hybrid lasers directly into chips and carries pulses of light between server components via strands of optical fiber. This helps move data much faster than what is possible with copper.

After more than a decade of research into the subject, IBM has developed the CMOS Integrated Nano-Photonics Technology – enabling the engineers to create a fully integrated, wavelength multiplexed silicon photonics chip using traditional semiconductor manufacturing technologies.

The chip uses four distinct colors of light within high quality single-mode fiber to multiply the data volume, and can send it across distances of up to two kilometers at speeds of up to 100 Gb/s.

This latest breakthrough was funded by IBM’s $3 billion investment in chip R&D announced last year. The reference chip itself will be presented at the 2015 Conference on Lasers and Electro Optics in San Jose, California later this week.

Making silicon photonics commercially viable is not an easy task: Intel has been doing its own research for the past 12 years and has suffered several setbacks – something it wasn’t afraid to admit publicly.

Another player in this field is US-based Luxtera – this company specializes in silicon photonics, and is currently manufacturing its own chips, which will become part of the upcoming Ericsson Hyperscale Datacenter System 8000 – but the details of the technology are not public, and HDS 8000 is yet to get a release date.