IBM has launched PowerAI, a collection of five artificial intelligence tools that have been fine-tuned to take advantage of Power-based servers with NVLink capability.

NVLink is a high-performance interconnect technology developed by Nvidia that can move data much faster than traditional PCIe expansion bus - five to twelve times faster, according to its creators.

On x86 systems, NVLink can be used to connect several GPUs, but with IBM’s alternative Power architecture, GPUs can be connected directly to a CPU for dramatically increased performance.

PowerAI includes popular deep learning frameworks Caffe, Torch and Theano, as well as branded distributions of Caffe developed by IBM and Nvidia. It is being distributed for free, but IBM will charge enterprise users for support. 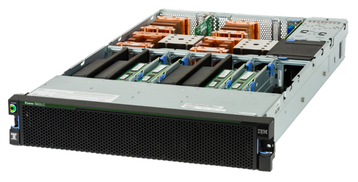 Deep learning is an approach to machine learning that extracts information by crunching through millions of existing data points. It can detect and rank the most important aspects of data, but requires immense parallel processing capabilities best delivered through GPUs.

Deep learning is already used in scientific research, as well as security, retail and automotive industries.

“When you look at being able to ingest data to do deep learning algorithms, the amount of training required, having high bandwidth between GPU and CPU is critical,” Ken King, General Manager, OpenPOWER, told DatacenterDynamics.

PowerAI is an attempt to supercharge this kind of computation by tightly integrating IBM’s recently announced, NVLink-equipped server codenamed ‘Minsky’ with the emerging tools that are becoming increasingly important for business.

“It’s a combination of the benefit of packaging up those frameworks for simplicity of consumption, simplicity of integration, providing a fully supported environment – so IBM will take care of your issues – and having it optimized on Power, leveraging our leadership performance because of that NVLink capability that we have on the platform,” King said.

“Enterprise [customer] is not going to just take open source and figure it out like Google will.”