A new startup from NextDC-founder Bevan Slattery has announced a new private fiber backbone with interconnection points for new subsea cables across the entirety of Australia.

HyperOne will be a 20,000+ km (12,000 mile) AU$1.5 billion (US$1.1 billion) hyperscale national fiber network across the country. The company promises speeds of 10,000 terabits per second, with interconnections planned for Darwin, Perth, and Sydney. The company claims the project will create more than 10,000 jobs during construction, and will largely be powered by renewable energy.

“HyperOne will also create new major interconnection points for more international undersea cables into Australia from Asia and as far as the Americas and Antarctica. With the current geopolitical instability in the region, there is unprecedented opportunity for Australia to become the region’s leading, secure and stable hub for future industries and jobs.” 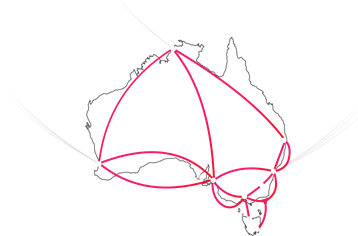 Slattery said the new network would be capable of carrying over 10,000 Tbps – more traffic than every other national backbone built in Australia’s history combined. He added it would have more than 1,000 on-ramps in regional and remote areas aimed at connecting underserved communities and remote areas in a cost effective way.

“The current networks have served Australia well for the past 20 years but they are nearing the end of their useful life and they were designed for a different time,” he said. “All the existing national transmission networks were built back when there was no YouTube, Netflix, social media, iPhones, or even cloud, let alone the future industries. They also didn’t address the digital divide in remote and regional Australia.”

HyperOne claims it is already in discussions with the National Broadband Network, the Northern Australian Infrastructure Fund, telecommunication companies, as well as the Federal Government and state governments. Federal Minister for Communications, Urban Infrastructure, Cities and the Arts, Paul Fletcher said the announcement was a welcome and that it plans to make a very significant investment in a new backbone fibre optic transmission network across Australia.

“HyperOne’s planned network would deliver a major boost in data transmission capacity into many cities and towns across Australia, which in turn would open up new economic opportunities, support new industries and generate jobs,” he said.

Slattery has a long history of involvement in the telecoms, data center, and infrastructure space. He has founded a large number of companies including iSeek, PIPE Networks, NextDC, AsiaPacific Data Centre, SubPartners, Megaport, SuperLoop, and CloudScene.