Hewlett Packard Enterprise (HPE) will be partnering with Microsoft to resell its Azure cloud platform. Although a formal announcement has not been made Meg Whitman, HPE CEO, made the decision public during a financial analysts’ conference call this week.

Whitman said: “HPE reached an agreement with Microsoft in which HP will sell Microsoft Azure as its ‘preferred cloud alternative.’ In exchange, HP will become a ‘preferred cloud services provider’ when Microsoft customers are looking for consulting or other help.”

In October this year Hewlett Packard finalized the process of splitting into two companies – HP Inc., to run the PC and printer operations and HPE which will provide technology services. The announcement comes close on the heels of HPE closing down its Helion public cloud. However, HPE has been struggling to keep up with the big tech services companies, so in that context HPE’s decision puts some much-needed Microsoft ‘heft’ behind its own brand. 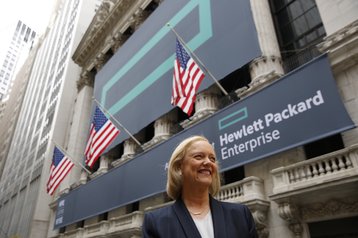 Both vendors are leveraging the hybrid cloud model

Both companies seem to have adopted strategies which assume the further rise of the hybrid cloud model where enterprises will operate dual policies – private cloud for all sensitive corporate data which needs high security and public cloud for less sensitive applications and data. HPE could also sell services and technology for the private cloud aspect of the hybrid approach.

Whitman said on the conference call that no official announcement had been made yet. Microsoft and HPE already work together through their Cloud Productivity and Mobility Solution Offerings offering companies solutions mostly based around Windows 10.

There are competitors to this approach, notably IBM and Oracle, however they provide cloud services which allow users to deploy some resources to a public cloud.

The benefit of HPE’s partnership approach is that if the strategy does not work HPE can always move to another public cloud provider, leaving its services arm intact. However the fact that HPE still has a lot of enterprise customers points to this proving to be a winning strategy medium-term for both players.