Honda is installing a self-developed stationary fuel cell power station at its US campus.

The carmaker will build a 1MW plant from the same equipment as its own Clarity fuel cell-powered cars, and use it to run the data center at its HQ in Torrance, California. The project will serve as a proof of concept for zero-emission backup power for the data center and other facilities. It should be on stream by early 2023. 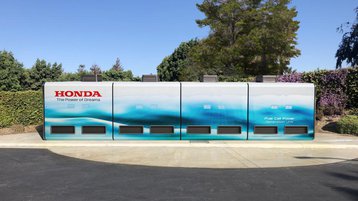 Honda has set a goal of achieving carbon neutrality for all its products and corporate activity by 2050.

Honda created the Clarity brand in 2008, and introduced a dedicated fuel cell in 2017, but had little success with fuel cell vehicles and canceled the car in 2021, citing slow sales in part due to a lack of hydrogen infrastructure to refuel the vehicles. Electric cars in the Clarity range have also been canceled in favor of rolling out battery (or fuel cell) operation to all Honda cars by 2040.

Honda does still have a fuel cell partnership with General Motors, and has said the technology is more suited to larger vehicles and stationary applications, especially when "green" hydrogen produced by electrolysis, becomes widely available.

The power station will use fuel cell components from Clarity vehicles, combined to make a stationary system, capable of producing up to 1152kW DC or 1MW-AC from an inverter. The system uses four units in a four-quad parallel formation which can be delivered in different shapes, including a cuboid, L-shape or Z shape.

The station will be connected to the data center on the campus in early 2023, giving Honda a chance to develop its knowledge of the us of fuel cells to provide backup power.

“We will leverage the expertise Honda has established in creating multiple generations of fuel cell systems for the development of a fuel cell power generation station,” said Mitsuru Kariya, VP of R&D at Honda US. “This project is an opportunity to further utilize our strengths in fuel cell technology to more quickly create, assess and advance a clean power generation system for potential commercial customers.”

Honda says it is still committed to developing fuel cell systems for passenger vehicles but in the US, the technology is expanding in larger trucks and transport ships, as well as stationary generation. Honda expects fuel cells to reach $86.7 billion annually by 2030, and says the technology is particularly suited to data centers, where the industry is looking for a replacement for diesel generators which create higher carbon emissions along with pollutants and particulates.