Asian tech giants have been criticized for their lack of commitment to environmental goals, in a Greenpeace East Asia report

Samsung Electronics, Xiaomi, and Alibaba were all singled out for criticism, in Greenpeace East Asia’s first regional tech ranking, The Race to Green. Sony's lackluster C+ was the best score in a report which took the region's tech companies to task for their lack of global 100 renewable energy commitments, and their failure to include supply chains, or to set emission reduction targets. 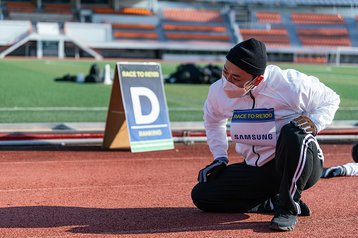 The report was launched in an event at the Hyochang Stadium in Yongsan-gu, Seoul, where activists posed to show the tech giants failing in a "Decarbonization Race."

As well as failing in ambition, the companies were also criticized for their lack of execution. "Few of the ranked companies have followed through on their commitments with real action," said the report.

Yahoo Japan and Rakuten are the only companies to commit to using 100 percent renewable power before 2030, promising to achieve this goal by 2023 (Yahoo Japan) and 2025 (Rakuten) respectively.

In Korea, Samsung Electronics alone consumed the equivalent of one fifth of South Korea’s total household electricity consumption, and the company has not made any promise to move to renewable energy in Korea. Xiaomi and Alibaba join Samsung near the bottom of the rankings, as they also haven't even made the net-zero promise yet

While Sony came top, it performed poorly. Although the company has promised to use 100 percent renewable energy by 2040, and reduce emissions across its supply chain, it only powers seven percent of its operations by renewable electricity currently.

Meanwhile, though half of the ranked companies have promised to move to net zero or carbon neutrality, only two of the companies, Rakuten and GDS, have actually achieved a modest 20 percent renewable energy usage.

Companies are also happy to hide emissions or ignore those they create within their ecosystem. Only three companies (Sony, Toshiba, and Hitachi) include emissions from their supply chain in their greenhouse gas emission reduction targets.

“Global tech companies need to achieve 100 percent renewable energy across their supply chain by 2030. In China, Japan, and South Korea, opportunities are available for corporations to buy renewable energy directly from the grid in the form of power purchase agreements, but companies need to make better use of these options. For many tech companies, the majority of electricity consumption comes from the supply chain, so it’s critical that tech giants include supply chain emissions in their targets,” said Wu.

"The tech sector brands itself as the industry of the future, but when it comes to climate action, tech giants like Samsung and Xiaomi remain trapped in the past," Wu continued.