The Green Software Foundation (GSF), set up to promote coding which uses less energy, has started publishing metrics to help achieve this goal. VMware, the virtualization software company, has joined the organization.

The Foundation has published an alpha version of Software Carbon Intensity (SCI), a way to score software based on its emissions, along with GPS-UP (Greenup, Powerup, and Speedup), a metric to assess whether software updates improve on energy efficiency. VMware has been working with GSF for some time, but announced its membership in a blog from the office of VMware CTO Kit Colbert. 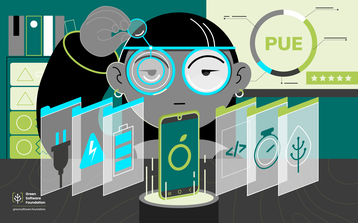 The GSF was founded by the Linux Foundation in May 2021.

With data center traffic and workloads growing rapidly, the tech industry must minimize its energy use by optimizing the efficiency of IT infrastructure, and design software that uses a minimal amount of compute resources, while powering those workloads with renewable sources where possible, according to the post's author, software engineer Adam Woosnam.

"As a new member of the GSF, VMware joins participants from Microsoft, Accenture, GitHub, NTT DATA, ThoughtWorks, and Globant, among others, building a trusted ecosystem of people, standards, tooling, and best practices for 'green software'," said Woosnam "We believe that sustainability is a vital tenet of responsible software development and should be valued as much as security, performance, cost, and accessibility."

Woosnam says software is “green” when it’s written to minimize the amount of greenhouse emissions it causes. This includes being hardware efficient to reduce embodied carbon, as well as using networks sparingly and shaping demand with "carbon-aware" applications.

"There are many ways to go about mitigating the climate impact of a given piece of software," said Woosnam, listing ideas including hosting strategies like virtualization which uses physical resources more efficiently), and intelligent scaling so excess work isn’t performed unless it's needed, as well as adding carbon awareness into source code, so apps do more work when the electricity source is greener.

VMware claims to have directly prevented the emission of 1.2 billion metric tons of carbon dioxide since 2003, according to its 2021 ESR report, by providing virtualization which allows loads to run more efficiently. The company has also added carbon metric visualization with new dashboards. But the field is complex, and GSF's discussions emphasize that any single metric will not be good enough.

"Green software is still an emerging field," said Woosnam. "While VMware is an expert at virtualization and efficient IT infrastructure, we still have a lot to learn about many other aspects of green software. That’s why it is critical for us to collaborate with our entire stakeholder ecosystem. By joining the GSF, we’re taking a step toward ensuring that our own software products embody green software principles while learning how to make it as easy as possible for our customers to build software around those same principles."

GSF's SCI measure addresses the complexity, with the Foundation explaining it "is not a total carbon footprint; it's a rate of carbon emissions for software, such as per minute or per user device, that can serve as an important benchmark to compare the carbon intensity of a software system as it is updated over time; or between similar types of software systems, such as messaging apps or video conferencing solutions."

Meanwhile, the GPS-UP measure of improvement for software updates faces the thorny problem that performance and efficiency can sometimes be at odds.