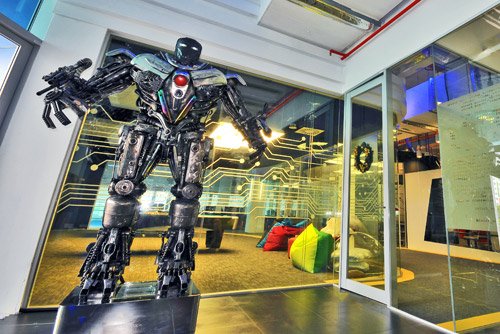 Google plans to use machine learning to make its Singapore data center more efficient, by optimizing the operation of cooling equipment.

The Singapore facility came online last December and is Google's first data center in Southeast Asia and its first urban, multi-story data center. Google is rolling out efficency algorithms that use machine learning in all its data centers, and the program will reach Singapore soon, Google’s VP of data centers Joe Kava told Singapore newspaper, TODAY.

The robot-themed Singapore data center, located in Jurong West, is one of the most efficient and environmentally friendly in Asia according to Google. It uses recycled water to keep its servers cool in Singapore's hot and humid climate, where temperatures average between 25 and 31°C.

Google invests heavily in renewable energy for its data centers around the world, and where it can innovates to make its data centers as efficient as possible. Keeping in with its zero carbon emission promise, it also offsets emissions by investing in companies that can also benefit from new efficiency measures. It runs its data centers at temperatures at ASHRAE’s highest recommended standards to save energy and uses power supplies that exceed the Climate Saver Computing Initiatives Gold efficiency standards.

Machine learning at Google
The machine learning algorithms were an idea of Google data center engineer Jim Gao, who developed a computer model which handles large amounts of operating information produced by a data center, and uses pattern recognition to learn how to improve its Power Usage Effectiveness (PUE) in realtime with better accuracy.

Gao’s research Machine Learning Applications for Data Center Optimization focuses on calculating PUE. His algorithm constantly tracks total IT load, outside air temperature and the levels at which it sets its mechanical and cooling equipment. Gao’s models are now 99.6 percent accurate in predicting PUE after various trials of the model.

The company has already applied machine learning technology to half of its data centers and is expecting to see the results of its efforts next year. Kava said machine learning will become an integral part of the artificial intelligence running the Singapore data center within a matter of months.

Ongoing investment
Asia is extremely important for Google according to Kava. “More than half of the world’s population live here, and in last year’s third quarter there were 60 million new Internet users — mobile only. That’s two times the entire Canadian population,” Kava said.

He highlighted although the company has no plans to build any more data centers in the region it is still growing its investments, which includes a long-term US$120m commitment to Singapore.