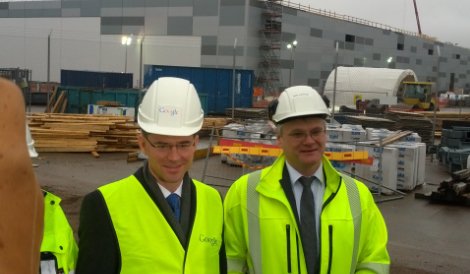 Google is continuing to ramp up its investment in its European data center operations, announcing a further EUR$450m (about US$608) will be spent adding additional capacity at its Hamina data center in Finland, famed for using seawater for cooling.

Last August Google said it was increasing its investment for the Hamina facility by US$184.5m, which would see the data center - which launched in September 2011 - double in size.

Kern was short on offering information on exactly how this money would be spent.

The mill’s granite seawater tunnels now pump water into the facility, bringing about efficiency savings which when teamed with free cooling make the data center one of the greenest in Google’s global fleet.

In June this year Google said it had entered a deal with German insurance company Allianz and Swedish wind-farm developer O2 to provide wind power for the facility for ten years from September 2015, using a wind farm in Northern Sweden providing 72MW of power.

But this new investment seems to be focussed more on increasing capacity.

“The investment underlines our commitment to working to help Finland take advantage of all the economic benefits of the Internet.”

The town of Hamina is just one in Finland which has suffered since the demise of its paper industry.

He said the government launched a new national investment promotion strategy in December 2012 which included data centers as a primary sector.

“Therefore, Google’s investment decision is important for us and we welcome it warmly,” Katainen said.

See how Google uses seawater for cooling at its Hamina data center in Finland here.