Planning to use the electricity to power new €600m data center

Google has signed a PPA with one of the Netherlands’ largest energy suppliers, Eneco, granting the company all of the electricity generated by the country’s largest solar park over the next ten years.

According to Eneco, the park will power the company’s recently opened Eemshaven data center. The deal follows a 2014 agreement with Eneco for solar power to cover Google’s Groningen data center

Located in Delfzijl, in the far north of the country, the 30 hectare solar park Sunport comprises 123,000 solar panels and offers 30MW of peak power (MWp).

You are my sunshine 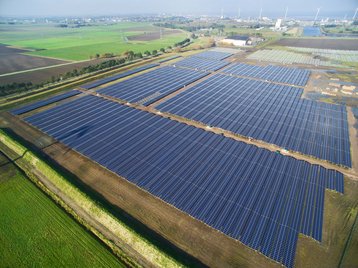 The value of the transaction is unknown, but the move is consistent with Google’s plans to transition to using exclusively renewable energy sources – wind turbines, solar panels and hydroelectric dams - to power its data centers by the end of the 2017, having already invested over €12 bn ($13.67bn) in offshore wind farms this year.

Last week, the company announced that it would begin receiving electricity generated at Norway’s Tellenes Wind Park in September.

Increased availability and drastically reduced costs have driven utilities and companies to turn away from fossil fuels, and more and more governments offer subsidies for manufacturing and use of renewables, threatening to tax carbon emissions, thus prompting higher demand for solar power.

Although currently solar only contributes approximately 1 percent of the world’s electricity, a study published in 2014 foresaw that it could provide up to 16 percent of it by 2050.

Barriers to its development include issues regarding storage and high tariffs imposed by countries wishing to protect their own solar industries- mostly against China, who overwhelmingly dominates the market, manufacturing 70 percent of the world’s most common type of solar panels.

Meanwhile, the data center industry is one of the world’s biggest consumers of (renewable) electricity, and strongly advocates for wider adoption of wind and solar energy, rejecting the US administration’s shift back towards the expensive, inefficient and environmentally disastruous coal industry.

Last year, Google joined the Renewable Energy Buyers Alliance (REBA), a group backed by a consortium of technology companies whose aim is to contribute 60GB of green energy to the grid by 2025.